Kyiv, February 1, 2015. The situation in Donetsk and Luhansk regions remains volatile. Pro-Russian militants used the artillery, mortars, tanks and “Grad” missile systems to attack the Ukrainian Armed Forces in order to change the ceasefire demarcation line to their advantage. The most intense fighting continues near Debaltseve. Forces of the self-declared republics attempt to seize territories around Vuhlehirsk, Sanzharivka and Nyzhne Lozove (Donetsk region). Thirteen soldiers were killed and 20 got wounded in the last 24 hours. 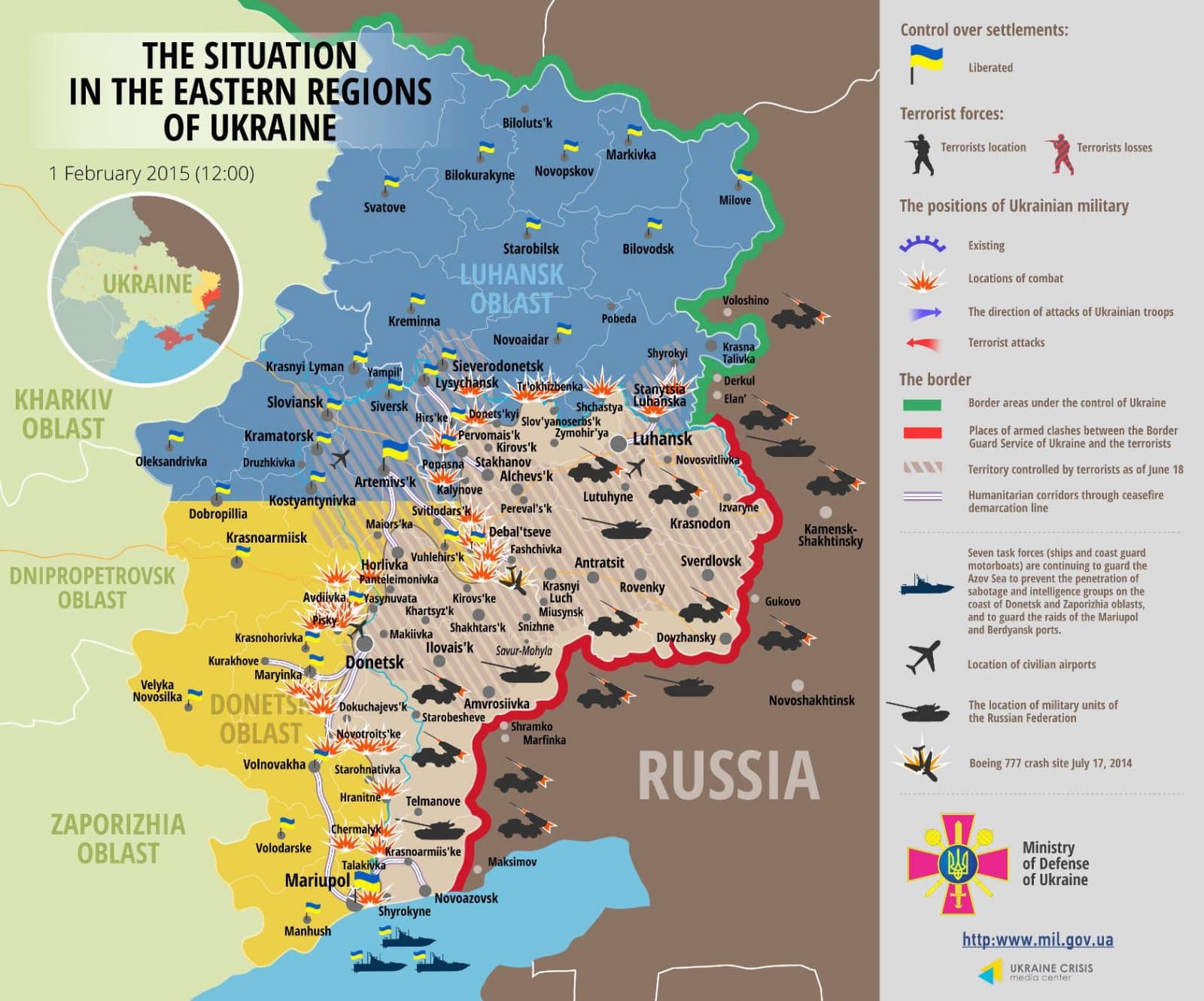 More news arrive about the 12th so-called “humanitarian convoy” from Russia that was sent to Ukraine on January 31. According to the Ministry of Emergency Situations of Russia, around 1,500 tons of cargo arrived to Donbas: 85 trucks are heading to Donetsk, while 90 are going to arrive to Luhansk. Representatives of the International Committee of the Red Cross did not observe how the “humanitarian convoy” crossed the border at the “Donetsk” checkpoint in Russia. Representatives of the Ukraine Border Guards and the State Fiscal Service of Ukraine have conducted only a visual inspection of trucks.

Five Ukrainian soldiers were released from the terrorist captivity thanks to combined efforts of the Ukrainian Armed Forces and the Security Service of Ukraine.

One civilian was killed and three more got wounded in eastern Ukraine due to the militants’ attacks.

Pro-Russian forces also shelled a power station in Shchastya (Luhansk region) from the “Grad” missile system. The entire city is left without heating. Furthermore, heating, as well as water and power supply, has been cut from Avdiivka and Debaltseve due to intense fighting around the area.

Ukrainian emergency services evacuated 956 people, including 161 children, from Avdiivka, Debaltseve and Svitlodarsk between January 28 and January 30. However, evacuation is seriously hindered because of consistent attacks on the cities.

Ukrainian authorities consolidate all their efforts to help frontline cities that suffered from terrorists and pro-Russian militants. On January 30, six tons of drinking water were delivered to Debaltseve. Humanitarian aid that mainly consisted from warm clothes and food was distributed as well. More than 2,5 tons of water was delivered to Mariupol for the needs of a local hospital and residents of the Skhidnyi [Eastern] district that suffered from terrorist attacks on January 24.

Moreover, despite consistent skirmishes, Mariupol increasingly becomes an impenetrable stronghold. We have built some powerful fortifications that will help us to prevent any enemy offensive.