National Security and Defense Council:Donetsk airport is completely destroyed and is not suitable for defense

Kyiv, 22 January 2015 – By means of shelling and direct attacks at the positions of Anti-Terrorist Operation (ATO) forces along the delimitation line, terrorists are trying to redraw it to their own benefit to expand the territory they control and take up positions favourable for further military operations. The Russian Federation continues playing a crucial role in the above processes by supplying weapons, ammunition and military equipment to the territory temporary controlled by the militants. Yesterday a decision was made to withdraw Ukrainian servicemen from the new terminal of the Donetsk airport. The airport is completely destroyed and is not suitable for defense. In the course of fighting, 16 Ukrainian servicemen were wounded and taken captive. The ATO forces are holding the fire station, the areas of the air control tower and of the runway that has been made unusable. Our military is confidently holding the reinforced positions at the localities of Avdiivka and Pisky. In the last day 10 Ukrainian servicemen were killed in action, [and] 19 were wounded. 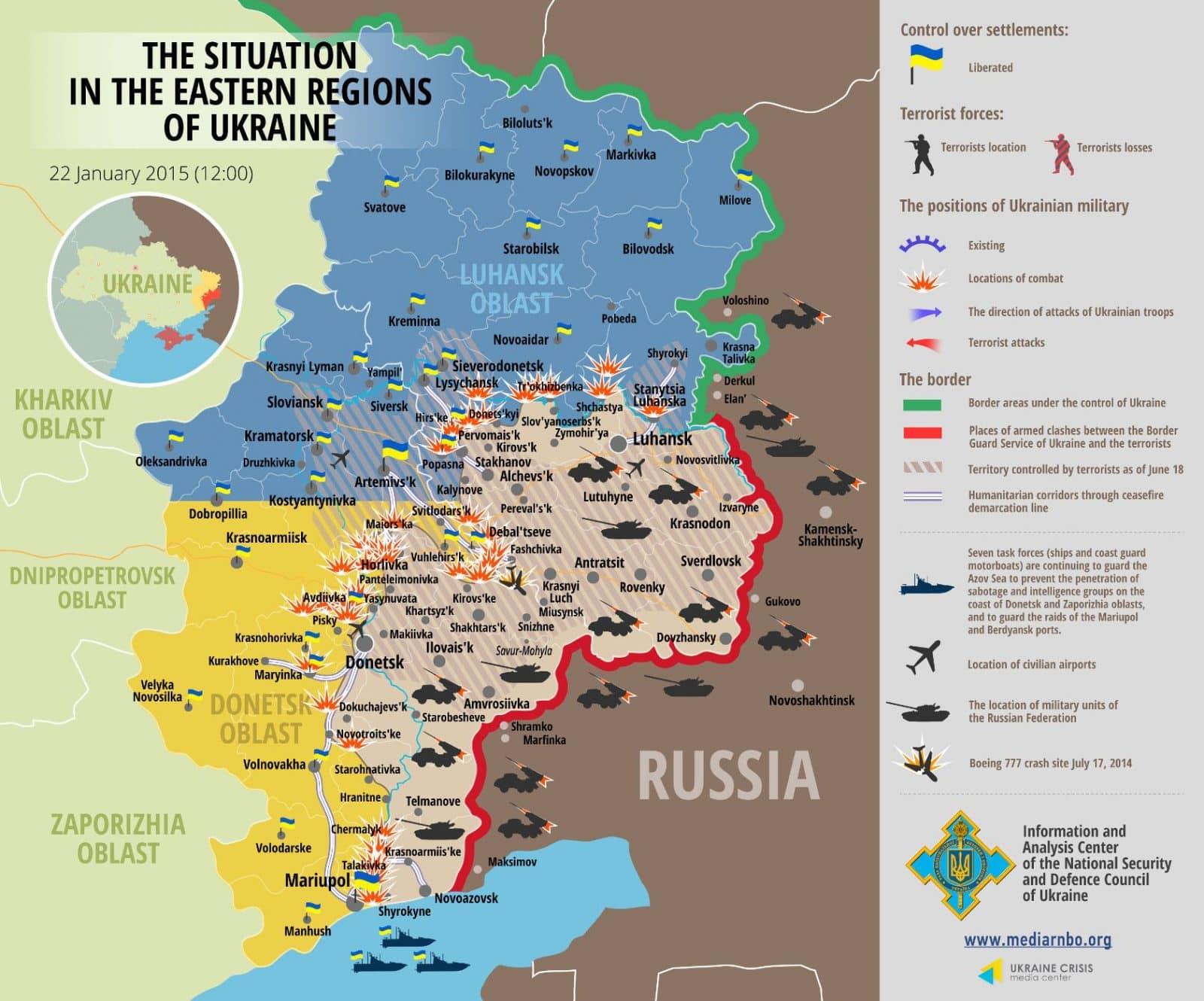 Ukrainian intelligence has noted the move of convoys of Russian military vehicles along the territory of the Rostov region of the Russian Federation, which is next to the Russian-Ukrainian border. The vehicles which were spotted include a considerable number of BMD airborne infantry combat vehicles and APCs of various types, tanks of modern modifications, “Msta-S” and “Nona”-type self-propelled artillery systems; Grad multiple rocket launchers, tented KamAZ trucks and petrol tankers. A Major part of the vehicles do not bear insignia, side markings and number plates. At the same time, some military equipment units had number plates of the Western, Eastern, Central and Southern military districts of the Russian Federation.

Due to the mortar shelling of the“Hnutove” access control point conducted bypro-Russian militants at the “Novoazovsk- Krasnoarmiysk- Talakivka- Mariupol” road direction, the access of persons and vehicles through the control point was temporary stopped in the first half of 21 January.

Terrorists are systematically ruining Donbas infrastructure and killing its local residents, according to Lysenko Yesterday, militants of the “LPR” group struck with mortars the 441th kilometer and the gas distribution station of the gas pipeline “Northern Caucasus-Center”. This morning in Leninsky district of Donetsk (in the southern part of the city) resulting from shelling of a passenger trolleybus, peaceful civilians were killed. As per the preliminary information, the shelling was conducted from a mortar that was moving across the city. Weunderline that the nearest positions of the ATO forces are located in Pisky village, and thus the tragedy site is beyond the reach of Ukrainian artillery of such type.