Kyiv, 5 January 2015 – Within the last day the number of armed provocation and shots fired by militants has increased in the anti-terrorist operation (ATO) zone. In addition to small arms terrorists are using tanks and artillery against the ATO forces. Ukrainian servicemen do not respond to provocations however in case of a direct threat to life of our servicemen terrorists receive adequate response. In the area near Hranitne and Starohnativka localities of Donetsk region Ukrainian military successfully repelled an attempt of the enemy’s attack. Militants keep deploying manpower and military equipment to the territory of Ukraine from the Russian Federation. Redeployment of Russian contract servicemen under the guise of local militants – the so-called rebels was spotted. Apart from that as per the intelligence data near Telmanove town militants dressed in the Ukrainian military uniforms of the new type were seen on the move. It could be a testimony to the ongoing prepartion of provocations. 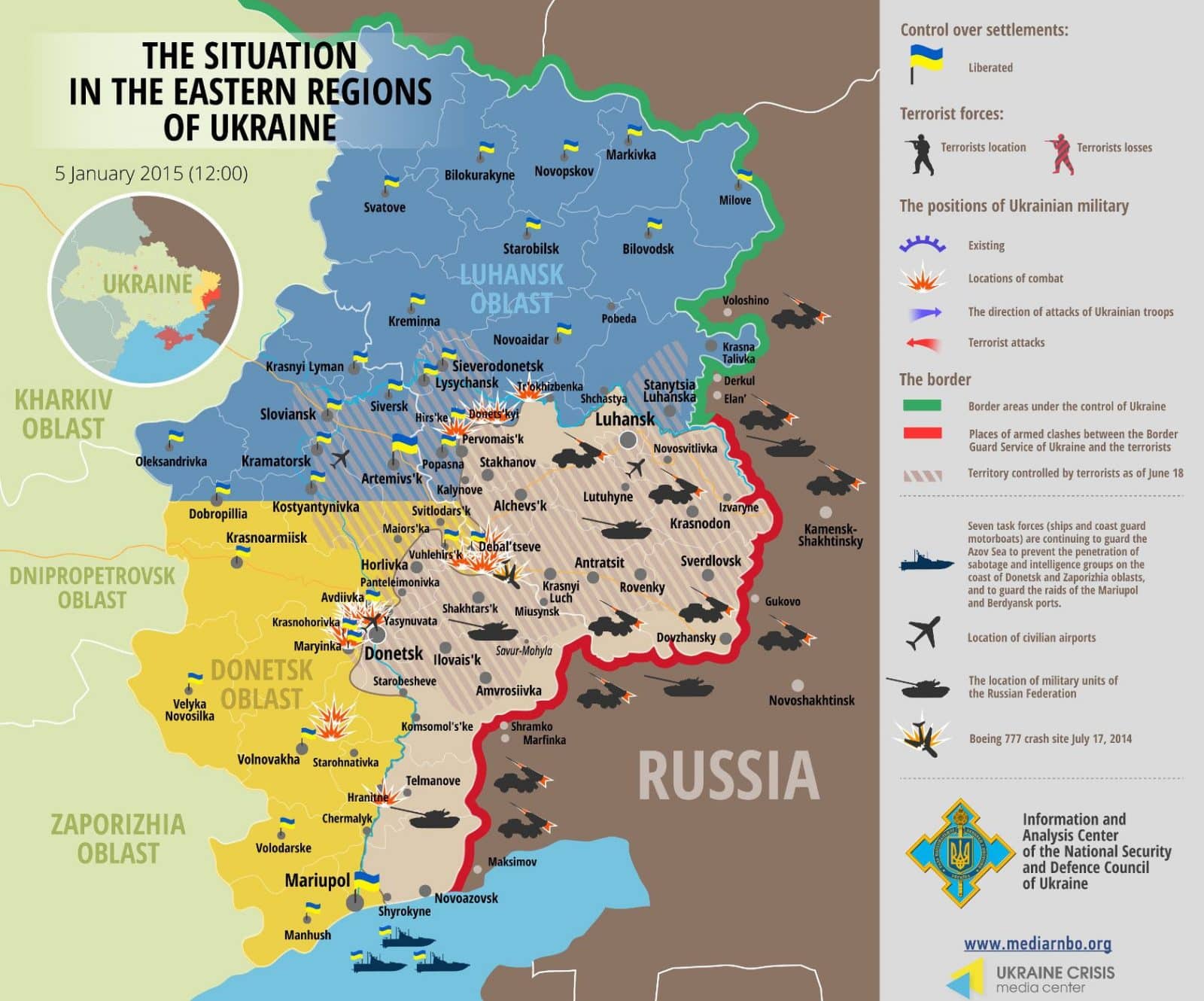 Most tense situation remains at the Donetsk, Luhansk and Mariupol directions. Within the last day units of the State Emergency Service of Ukraine detected and seized 27 units of munitions including mortar shells, combat grenades etc. Since the State Emergency Service started their activities in the ATO zone 31,913 units of munitions have been seized including 5,040 artillery shells, 2,653 mortar shells, 2,742 combat grenades and mines, 536 rockets. Within the last 24 hours no Ukrainian servicemen were killed in action, one was wounded.

Rotation of Ukrainian servicemen who defended their Fatherland in the ATO zone continues. Yesterday over 500 volunteers came back to Lviv from the East, around two month they were on service near Krymske. Our servicemen were welcomed by their relatives and friends, the city heads and patriots of Lviv.

Сonsultations in the “Normandy format” have started еoday in Berlin at the level of political directors of the Foreign Affairs Ministries of Ukraine, Germany, France and Russia. At the meeting Ukraine is represented by Olexiy Makeev, Director of the Department for politics and communications.

The meeting was organized in line with the agreements reached during the telephone conference of the Foreign Affairs Ministers of Ukraine, Germany, France and Russia on 2 January 2015. The issues to be discussed at the consultations include implementation of the Minsk agreements and preparation to the meeting of the Heads of States in Astana scheduled for 15 January.
05.01.2015