Kyiv, March 18, 2015 – Ukraine’s Security Service uncovered and liquidated a militant spy ring in the Luhansk region subordinated to the Russian Special Services. The ringleader gathered intelligence on the number of personnel and weapons of the Ukrainian forces, personal data of Ukrainian servicemen, as well as progress of the mobilization process in the area. Russian intelligence used this information to plan terrorist and sabotage acts on the territory of the Luhansk region. 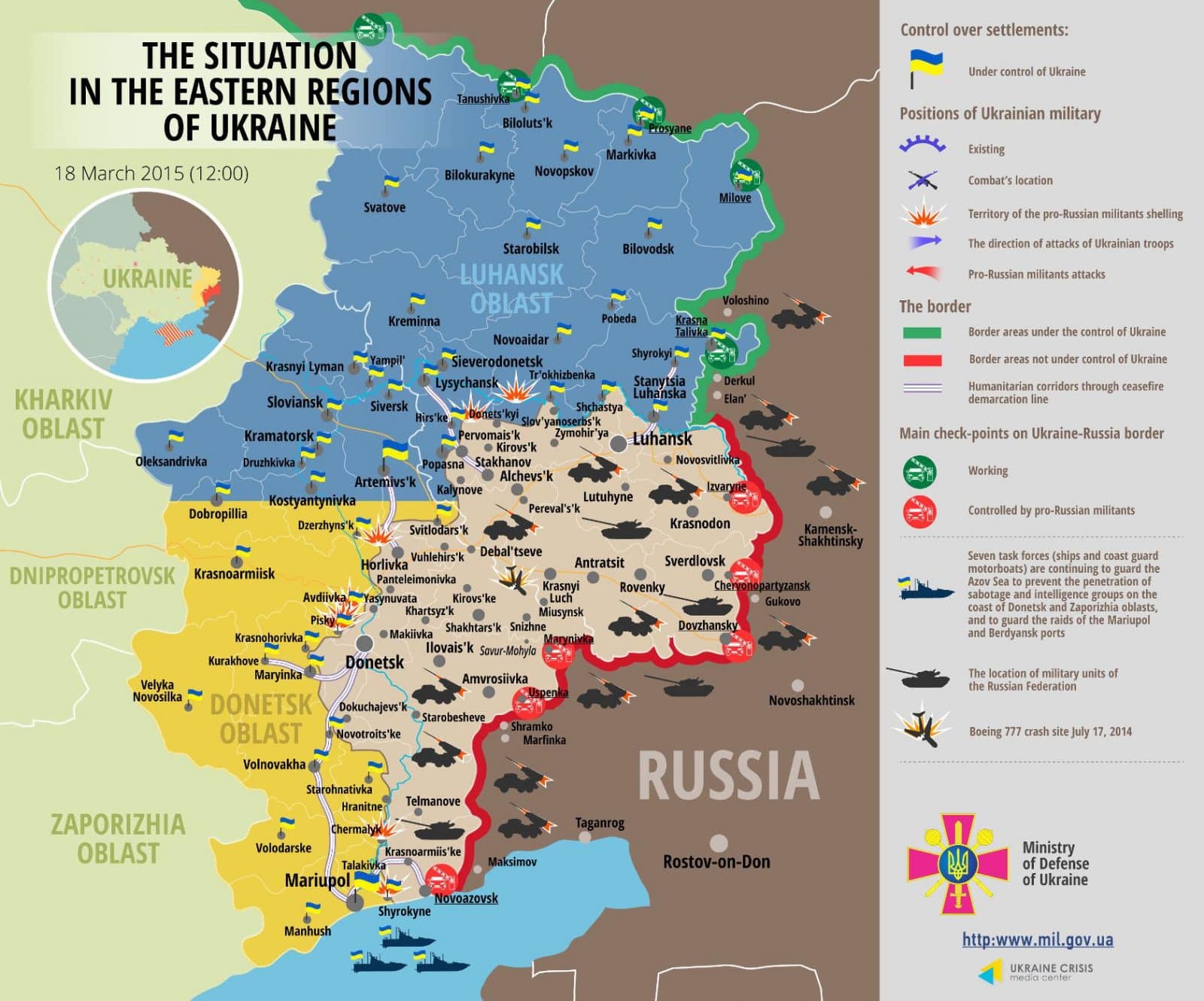 Areas to the east of Mariupol, Donetsk airport areas and the towns near the Bakhmutka highway in the Luhansk region remain the hotspots of the conflicts. No cases of artillery shelling were recorded over the last day. However, pro-Russian militants instigated a number of armed provocations against the Ukrainian Armed Forces, using armored vehicles.

One Ukrainian serviceman was killed in action and 5 got wounded in the last 24 hours.

Ukrainian servicemen collected money for the woman who was severely injured in the road accident in Kostyantynivka. The investigation of the tragedy continues. Col. Lysenko said that the first suspect has been taken in custody according to the court ruling. Representatives of the Military Prosecutor’s Office and of the military law-enforcement emphasized that all those responsible for the accident will be brought to justice.

Ukrainian policemen seized 6 hand grenades, 1.6kg of gunpowder and ammunition rounds in the city of Pidhorodne near Dnipropetrovsk. Furthermore, three elements of cluster munitions used by “Smerch” multiple rocket launchers were discovered in the area of Lysychansk.

It was reported about the series of parliamentary decisions regarding the conflict in the East of Ukraine. The Parliament of Ukraine voted in favor of recognizing militant-held areas of Donetsk and Luhansk regions as occupied territories. Also, the parliament approved the resolution to address the United Nations Security Council and the European Council to call for the peacekeeping mission to Ukraine. Such a decision would lead to a prompt solution of the conflict in Donbas and allow to implement the Minsk agreements.