Kyiv, April 18, 2015. Representatives of Ukraine at the Joint Center on Control and Coordination of issues related to ceasefire regime and the stabilization of the situation, have visited the village of Shyrokyne, and expressed their readiness to demilitarize the zone under Ukraine’s control if the militants uphold complete ceasefire. A permanent observing station is going to be set up in the village, involving OSCE monitors. 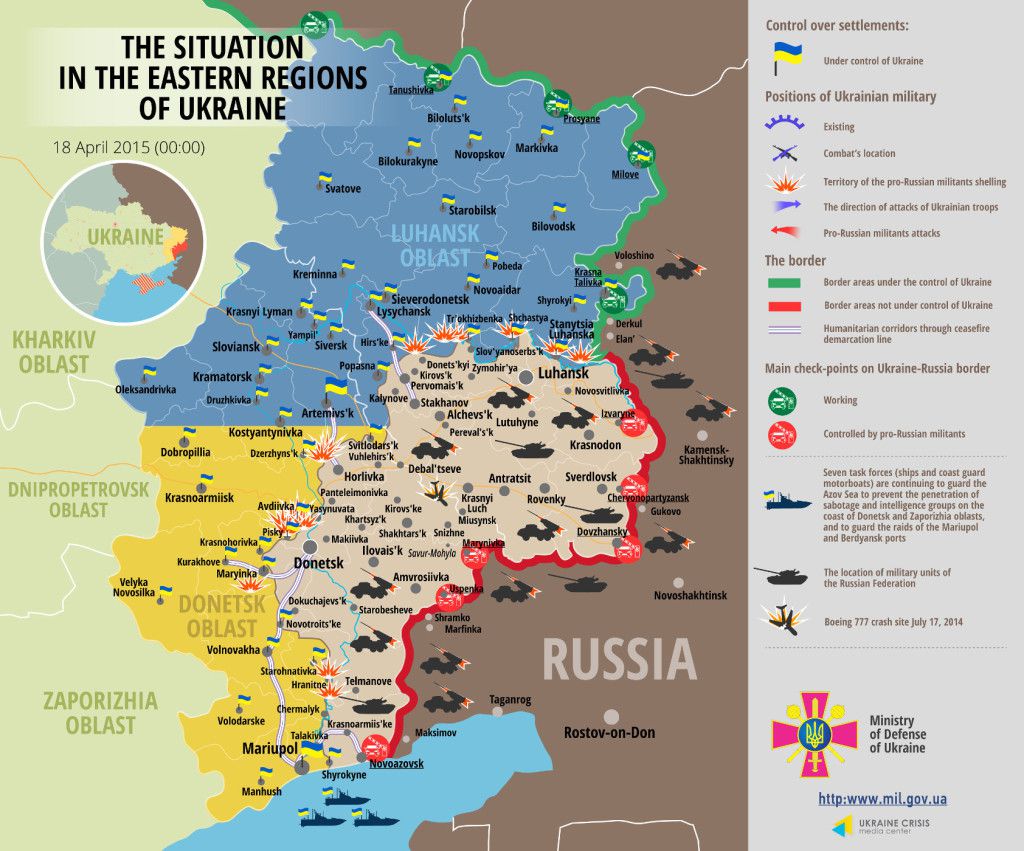 Pro-Russian insurgents still do not comply with Minsk agreements by repeatedly instigating armed provocations against Ukrainian troops. They have used from 120-mm mortars 24 times and 122-mm artillery pieces five times as well as fired from tanks three times. Enemy snipers have been active yesterday as well.

Several areas remained the hotspots of the conflict. These are Hryhorievka village in the Mariupol sector; areas around the airport as well as those close to Hranitne village and the outskirts of Horlivka in the Donetsk sector; Schchastia and Stanytsia Luhanska in the Luhansk sector. The Ukrainian Armed Forces clashed with Kremlin-backed insurgents near the village of Tryokhizbenka in the Luhansk region today.

Ukrainian Armed Forces did not incur any lethal casualties in the last 24 hours; one serviceman got wounded, which has happened in the area of Leninske village close to Horlivka.

Several days ago three groups of militant subversives have attacked the Ukrainian troops. Ukrainian servicemen destroyed military equipment and a number of vehicles that belonged to the militants. The latter were forced to retreat after serious casualties inflicted upon them.

Russian authorities have been “hypocritically lying” about the conflict in eastern Ukraine. Thus Colonel General Viktor Muzhenko, Chief of the General Staff of the Armed Forces of Ukraine, has named Russian military regiments that participated in the military action. Currently there are several Russian military units stationed in Donbas. These are the 15th Motor Rifle Brigade of the Second Army (Central Military District), 8th Motor Rifle Brigade, 331st Airborne Regiment based in Kostroma of the 98th Airborne Division and others. Col. Gen. Muzhenko noted that some of the Russian regiments that have occupied parts of Ukraine are going to take part in the forthcoming Moscow Victory Day Parade on May 9.

Ukraine’s foreign partners confirm this information too. Marie Harf, acting spokesperson for the United States Department of State, said there is ample evidence of the Russian military presence in eastern Ukraine. She has also told that Russia created command stations and training sites in eastern Ukraine to prepare new militant recruits. Ms. Harf emphasized that these factors are the reason why the President Barack Obama announced that Washington is not going to lift sanctions from Russia until it fulfils the Minsk Protocol in its entirety and peace in eastern Ukraine is restored.