National Security and Defense Council: Ukrainian Army did not suffer any casualties over the last day

Kyiv, March 26, 2015. Not a single Ukrainian serviceman has fallen or suffered injuries as a result of the military action in the last 24 hours. On the other hand, pro-Russian militants continued to instigate armed provocations along the contact line, stretching from the Azov Sea to the western parts of the Luhansk region. The militants fired at the Ukrainian military positions near Opytne from a tank; they have also mortared Avdiivka yesterday. No cases of artillery use were recorded. 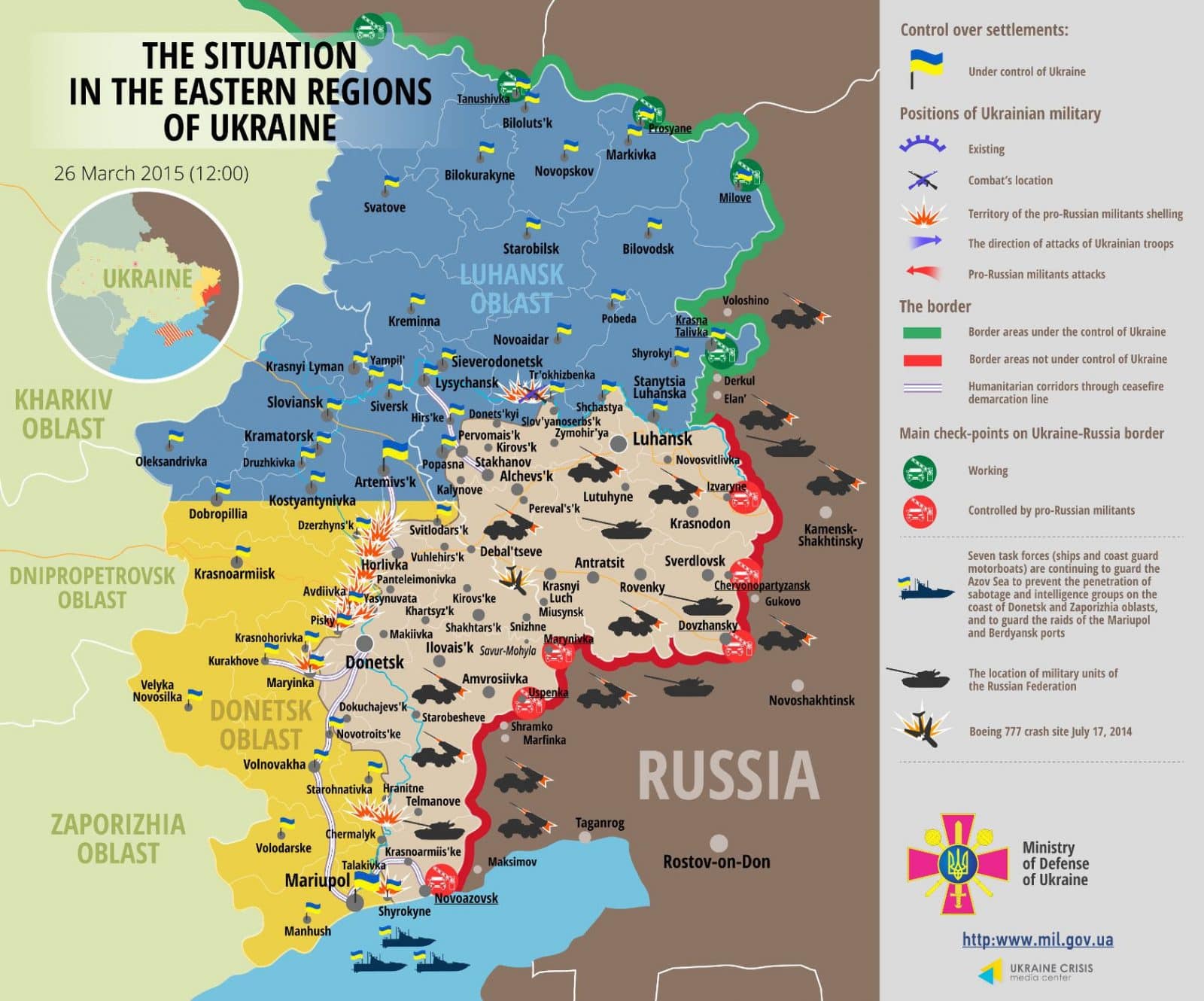 Russia keeps supplying its proxies. Two convoys with the military equipment, which included tanks, petrol trucks and cars crossed the Russia-Ukraine border to the militant-held territories.

A passenger bus drove over a mine in the vicinity of Horlivka yesterday. Four people were killed and 20 got injured as a result of explosion. The bus was turned around at the Ukrainian blockpost of “Mayorsk” as all movements across the contact line during the night are prohibited. The driver attempted to drive around the blockpost and hit the mine. Ukrainian Armed Forces evacuated the wounded to hospitals.

At the same time eight times have been deactivated thanks to the work of Ukrainian minesweepers in the Kostyantynivsky district of the Donetsk region.

Ukrainian policemen prevented an attempt to transfer weapons and ammunition out of the ATO zone. The officers seized four machine guns with 16 magazines, 10 boxes of ammunition rounds, three F-1 grenades, a bayonet, seven bulletproof vests and other pieces of military gear. Also the policemen seized an RPG-26 anti-tank grenade launcher that a resident of Kurakhove was trying to sell.

Meanwhile, Ukraine’s Security Service neutralized members of a subversive group in the Donetsk region who planned to abduct one of the Ukrainian military officers. Three more militants were detained in Odesa; one of them was plotting to organize terrorist acts in the city. The operatives confisctaed a stock with explosives and weapons such as rifles with sniper sights from him. The other two were connected with the so-called “DPR” and “LPR”, spreading anti-Ukrainian propaganda.

The Ukrainian counter-intelligence successfully conducted an operation to clear up the ATO zone from illegal arms, as well as detained over 30 suspects in relation to the murder case of the SBU Captain Viktor Mandzyk. Suspects were detained in Donetsk and Dnipropetrovsk regions. Thus, security service took eight servicemen and 10 civilians in the Volnovakha district, Donetsk region, in custody. Suspects presented themselves as activists and policemen. According to the SBU, the search for persons suspected in being involved in the murder of the SBU officer, including one Assistant MP, continues. Four witnesses and one person suspected in the killing have been detained. The operatives searched the apartment of one of the suspects in Dnipropetrovsk and uncovered grenade launchers, grenades and TNT blocks. Moreover, they found 20 grenades in the bus that the killers used to move around Dnipropetrovsk.