Kyiv, February 27, 2015. Ukrainian Armed Forces withdraw their 100-mm MT-12 “Rapira” anti-tank guns on the distance of at least 25 km from the contact line in accordance with Minsk agreements. This process takes place in spite of the sporadic fire from the militants groups. The withdrawal is conducted under careful supervision of OSCE monitors. President Petro Poroshenko emphasized that Ukrainian servicemen are ready to bring their weapons back to the initial positions if the enemy decides to attack. 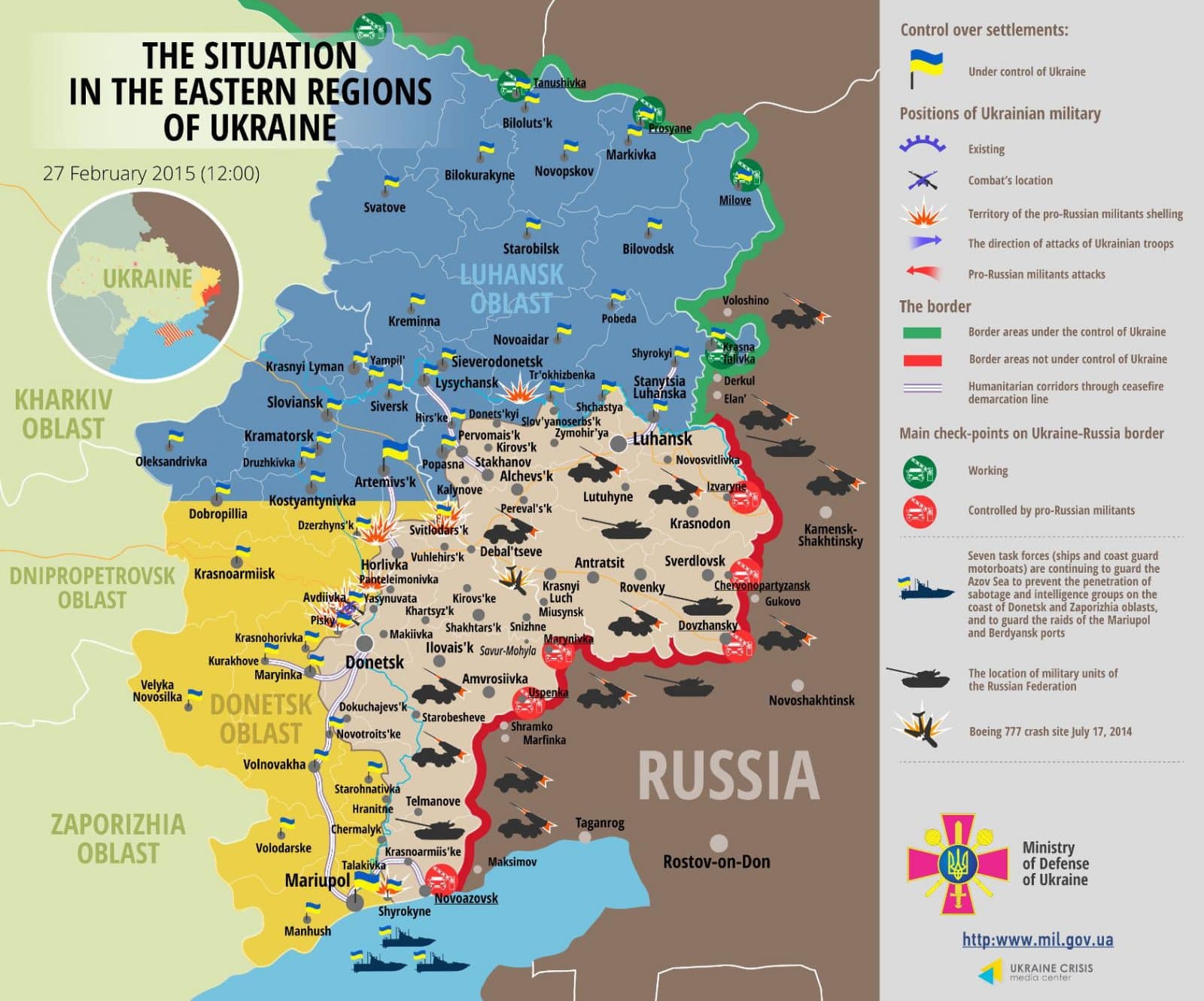 On the other hand, Russia-backed militants only partially withdraw their weapons on the distance that could be covered within 30 minutes. According to Michael Bociurkiw, OSCE SMM spokesman, international observers still did not receive detailed information of military inventories, withdrawal routes and points of the weapons’ location afterwards, which makes it impossible to monitor the withdrawal of militants’ equipment.

The number of militant attacks in Donetsk and Luhansk regions has decreased. At the same time, Russia-backed insurgents regroup their forces and conduct reconnaissance activities along the whole contact line. The enemy continues to amass its forces and military equipment in Stakhanov, Luhansk and Krasny Luch. Our intelligence report covert accumulation of manpower and military equipment in the areas of Popasna and Artemivsk of the Luhansk and Donetsk regions respectively. There is a persisting threat of offensive in the direction towards Stanytsia Luhanska, Shchastia, Lysychansk and Mariupol.

Moreover, insurgents strengthen their lines of defense, conduct reconnaissance missions and amass more forces under the guise of withdrawal of heavy weapons. Militants’ forces have been redeployed from Debaltseve to the area of Pisky, Maryinka and Shyroke. Around 100 units of military equipment moved from Bryanka toward Devaltseve as well. Furthermore, “Grad” multiple rocket launchers and up to 50 units of other military equipment moved from Donetsk toward the Mariupol area.

Russia continues to supply its proxies; hence it delivered military equipment, ammunition and fuel to the Ilovaysk railway station currently under the militant control.

Militants fired at the Ukrainian positions from the artillery, mortars and tanks as well as stormed those in the area of Opytne, Vodyane and Avdiivka. Ukrainian soldiers repelled all attacks.

3 Ukrainian servicemen were killed and 7 got wounded in the last 24 hours.

Russia’s 17th so-called “humanitarian convoy” has invaded Ukraine. A total of 170 trucks crossed the Ukraine-Russian border through the “Izvaryne” and “Uspenka” checkpoints. Most cars contained cargo of non-humanitarian character, including 41 trucks with fuel and two trucks unspecified literature. The Russian “humanitarian convoy” has blatantly violated both the international law and the Ukrainian legislation yet again. Ukraine’s border guards only saw the convoy passing into the territory of Ukraine.