National Security and Defense Council: The Russian Federation continues deploying equipment to the East of Ukraine

Kyiv, 19 January 2015 – Situation in the anti-terrorist operation (ATO) zone tends to escalate. The number and intensity of shelling of the ATO forces positions by terrorists has considerably increased, in particular of the shelling coming from residential areas of localities. Ukrainian military are rebuffing militants’ attacks inflicting heavy losses in manpower and equipment on them. Meanwhile Russian servicemen are putting marks on their vehicles typical of the Ukrainian army. It testifies to the fact that Russia continues to hide its participation in the armed conflict in Donbas and is intensifying its campaign to discredit Ukrainian Armed Forces among the local population,” noted Andriy Lysenko. The illegal criminal group “LPR” made a statement on establishing own “military air force” including 2 aircraft (Su-25 jet aircraft and L-29 trainer aircraft). This fact testifies to the beginning of the information campaign to cover possible use of the Russian aviation against the ATO forces. 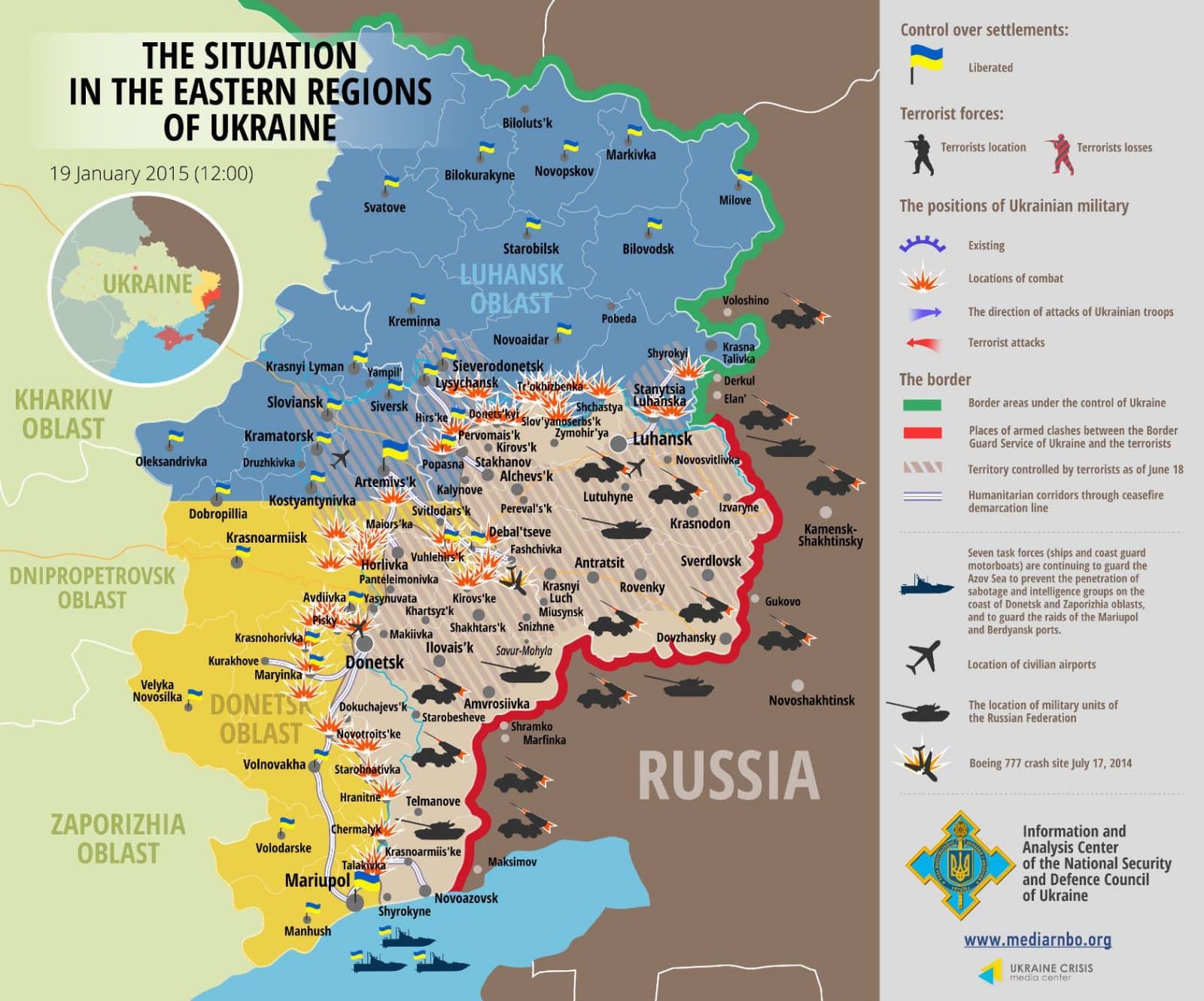 The situation in the Donetsk airport area remains particularly tense, militants are actively deploying military equipment and manpower to the location. Redeployment of equipment and weapons to the Mariupol direction is observed. Apart from artillery and mortars terrorists are massively using BM-21 Grad multiple rocket launchers disregarding the lives of local population. Resulting from Grad shelling of Vuhlehirsk in Donetsk region two boys – 7 and 16 years old were killed, 9-year old girl was heavily injured and delivered to the local hospital. Terrorists’ shelling resulted in civilian casualties in localities Maryinka, Krasnohorivka and Dzerzhynsk.

Today at around 7:45 militants shelled Debaltseve with artillery yet another time. Around 15-20 shells hit the city center, at least 10 people got wounded including a 8-year old girl and her mother. Many people got affected, there are heavily wounded children and ruined houses. Apartment blocks and private houses got ruined or damaged, the house of culture and the railway station buildings got damaged. Due to massive mortar fire by terrorists from 18.00 to 19.05 access of persons and vehicles at the road direction “Novoazovsk-Krasnoarmiysk-Talakivka-Mariupol” has been temporarily ceased.

In the last day 3 Ukrainian servicemen were killed in action, 66 got wounded.

To remind, on 13 November representatives of Ukraine and Russia signed a working document that foresees a clear-cut schedule for implementation of the Minsk memorandum, in particular as to establishing of bilateral ceasefire, withdrawal of heavy equipment and return to the delimitation line. The Russian side recalled its signature from the above document. Today Ukraine has addressed the Russian Federation another time suggesting to sign the schedule for implementation of the Minsk agreements in its version of 13 November and provide for ceasefire effective 19 January. The Russian Federation President continuously claims compliance with the Minsk agreements at the same time militants of the so-called “Donetsk-“ and “Luhansk people’s republic” continue storming the Donetsk airport. Ukraine fully complies with all the paragraphs of the Minsk agreement and demands same from Russia.
19.01.2015