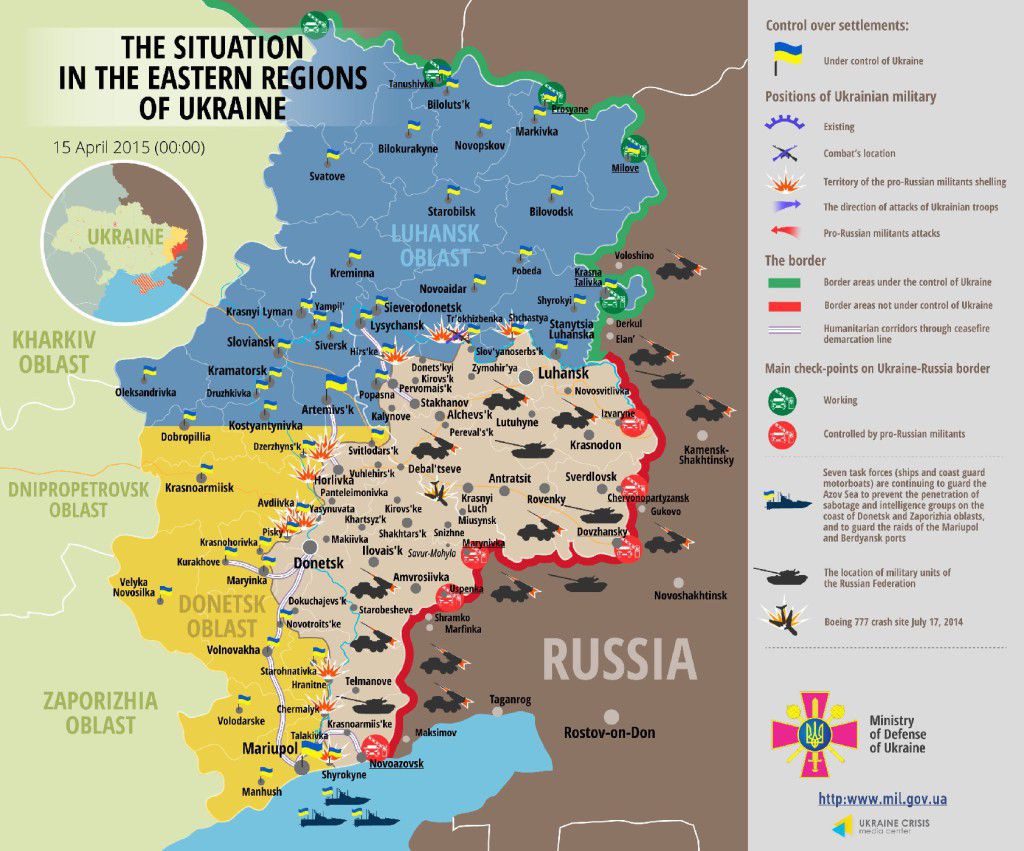 Russia-backed militants instigated armed provocations against Ukrainian troops, using small arms, grenade launchers and mortars. They have also fired from tanks twice in the area of Pisky village. Militants did not use cannon artillery over the last day. Shyrokyne and Chermalyk at the Mariupol direction, areas around the Donetsk airport and towns close to the Bakhmutska road in the Luhansk regions were the hotspots of the conflict.

Ukrainian servicemen spotted 22 enemy UAVs yesterday, downing one of them that was flying from Starobilsk towards Lyman, Luhansk region, at the height of 3,000 meters. These towns are 30 kilometers away from the demarcation line.

One Ukrainian serviceman was killed in action and two got wounded in the last 24 hours.

Members of the OSCE Special Monitoring Mission and of the Joint Coordination and Control have visited Shyrokyne village. The monitors urged for a bilateral stage-by-stage withdrawal of forces in order to demilitarize the region.

Russia-backed militants have started to issue temporary IDs to be later replaced by “DPR passports”. No country in the world will recognize them, they will not be valid when crossing the state border and cannot be counted as a proper document during any kind of legal operations.

Ukrainian counter-intelligence detained three “DPR” members who organized an illegal plebiscite in the Donetsk region last year. One of them was appointed as a “Minister of State Emergency Service of DPR”, while another was part of the “DPR military police” punitive group.

Meanwhile, 200 Canadian military instructors have arrived to Ukraine to train the Ukrainian Armed Forces. The training program will last until 31 March 2017.