Kyiv, July 2, 2015. In Donetsk sector, Russia-backed militant provocations and heavy weapons use decreased. The fiercest fighting took place in Mayorsk, on the northern outskirts of Horlivka and western edges of Donetsk. Other hotspots included Pisky and Maryinka. Ukrainian Armed Forces incurred no lethal casualties during the last day. 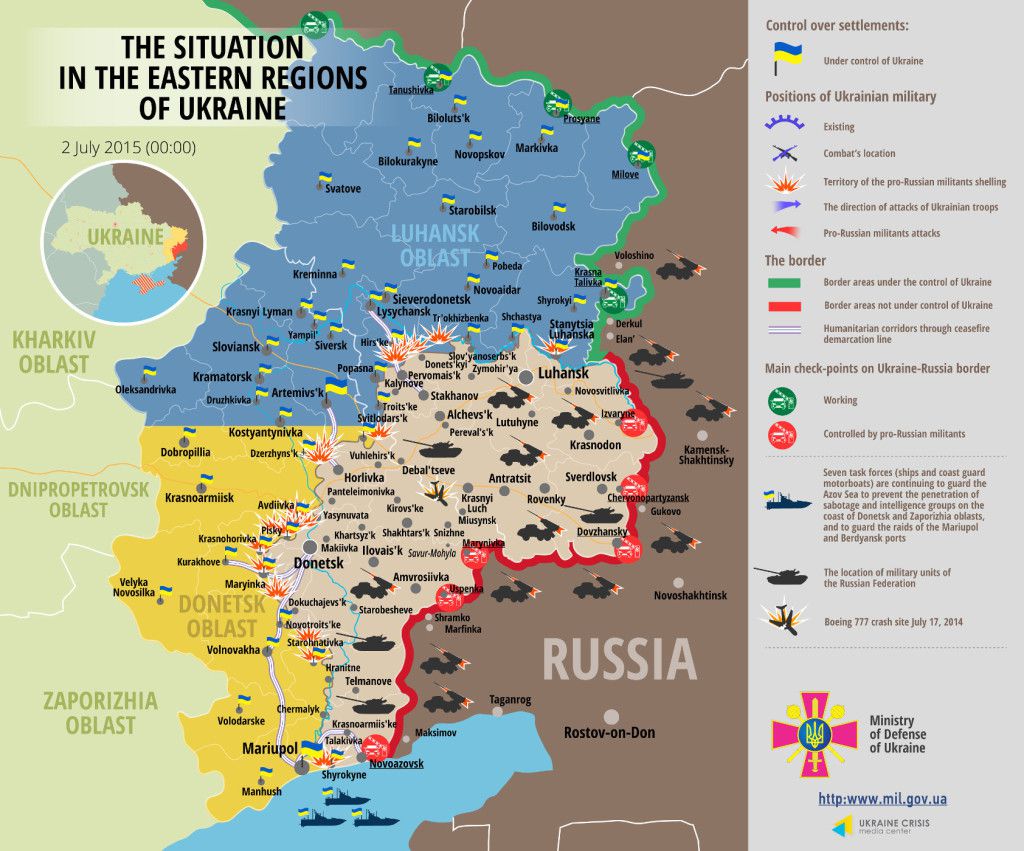 However, the situation escalated in the Mariupol sector. Militants are actively using tanks and artillery that they have concentrated near the combat line. Ukrainian troops in Bohdanivka, Starohnativka, Shyrokyne and Berdyanske came under enemy fire.

Furthermore, Ukrainian border guards and the Armed Forces reported two enemy UAVs during the past day.

Two Ukrainian servicemen got wounded in action in the last 24 hours near Donetsk and Horlivka.

In other updates, authorities detained two residents of Rubizhne, Luhansk Oblast. These residents were reporting information on Ukrainian Armed Forces locations and movement to an “LPR” militant nicknamed “Shaman”. Searches on militant houses were conducted. Maps marked with positions and checkpoints of Ukrainian troops, and RGD-5 grenades with fuses and ammunition were discovered.

The Verkhovna Rada (Ukrainian Parliament) ratified agreements with NATO to receive support and supplies. From now on, Ukraine will have the opportunity to receive support from the Alliance in the areas of supplies, technical servicing, procurement of goods and services, transportation, technical assistance and most importantly from projects of NATO’s Trust Fund.

Additionally, the Parliament ratified a memorandum of agreement between the Government of Ukraine and the NATO Communications and Information Organization that sets the groundwork for cooperation in the areas of intelligence, and surveillance and reconnaissance in the framework of NATO’s ‘Partnership for Peace’ program.