Kyiv, March 10, 2015. Russia trains its proxies in eastern Ukraine, preparing for a new wave of hostilities, stated Colonel Andriy Lysenko, ATO spokesperson, during the press-briefing at Ukraine Crisis Media Center. He told that Russia dispatched a large group of FSB operatives ordered to purge those who refuse to obey the so-called “Donetsk People’s Republic”. They have also negotiated with the leader of the “Russian Cossacks” who controls Antratsyt, cajoling him to unite his forces with the self-declared “Luhansk People’s Republic”. 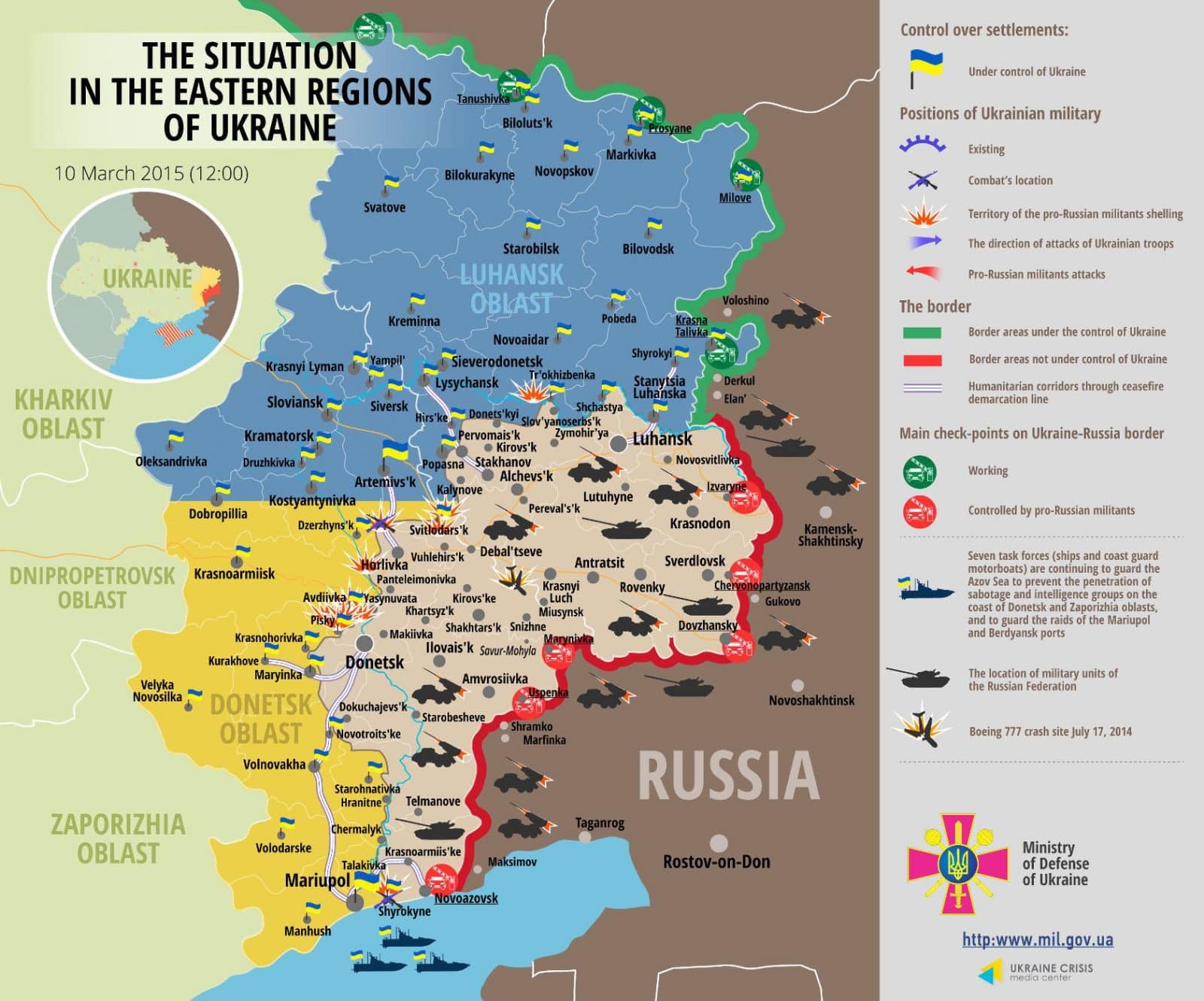 Pro-Russian insurgents have attacked the Ukrainian positions 31 times. Claims of the militant leaders that they have withdrawn heavy weapons according to Minsk agreements proved false, as the Ukrainian servicemen got shelled from the artillery five times. Two more attacks have occurred after midnight; one targeted Vodyane, Donetsk region.

Ukrainian forces engaged in a fierce military action with the pro-Russian militants near Shyrokyne. The enemy tried to assault the Ukrainian foothold for 12 hours but failed. Ukrainian soldiers destroyed one tank and an arms arsenal, as well as eliminated several opponents.

Nine Ukrainian servicemen got wounded, while no lethal casualties were recorded in the last 24 hours.

Ukrainian servicemen spotted 11 enemy UAVs. There was also a SU-24MP reconnaissance airplane flying over Russia’s Volgograd and Rostov regions, as well as over the Azov Sea. The enemy continues to use the means of electronic warfare.

Russia-backed militants exploded the railway bridge and a track near Orekhovo village, Luhansk region. A power substation in Pervomaisk has been severely damaged. Overall, 5 settlements in the government-controlled parts of the Luhansk region experience substantial power shortages, while there are 43 such settlements on the territory held by the militants of the “Luhansk People’s Republic”.

After following the Join Center for Control and Coordination resolution, the de-mining procedure in Kominternove has started. The operation was conducted in three stages: first, some unexploded ordnances in different areas of the village were detonated; second, unexploded ammunition left on the outskirts, as well as tank shells and illumination rockets were detonated as well, and third, the demining experts collected ammunition from local residents. The joint demining project in government-controlled Pavlopil, Donetsk region, is scheduled to take place soon.

Ukraine’s Security Service detained criminals who spread the anti-Ukrainian propaganda. The operatives confiscated AK-74 rifle with ammunition, RGD-5, 3,500 propaganda leaflets, as well as documents that verify their involvement with the militant groups in eastern Ukraine. Security services also detained one more “LPR” insurgent who fought against the Ukrainian military in Lysychansk.

Furthermore, Ukrainian policemen arrested “LPR” militant suspect in car-stealing and kidnapping. Six more criminals, including one Russian citizen, got detained in Khmelnytskyi. The officers confiscated an AK rifle, a hand grenade, a revolver and a pistol with a set of ammunition.