Kyiv, March 2, 2015. Ukrainian policemen of the Luhansk region revealed and confiscated one of the biggest arms arsenals that belonged to pro-Russian militants. Policemen seized 7 boxes with 6160 7,62mm rounds; 5 boxes with 90 F-1 grenades; 8 MON-50 mines, 2 boxes of TNT blocks (52 kg), 11 “PG-7L” shells for grenade-launchers, 36 RKG-2 hand grenades, 11 smoke grenades, 7 anti-tank mines, an automatic gun, a rifle and gunpowder. The insurgents carefully disguised the arsenal and put trip wires as a trap in the abandoned house. Policemen also discovered a bag with documents and other items that confirmed facts of murders and armed assaults committed by the pro-Russian insurgents. 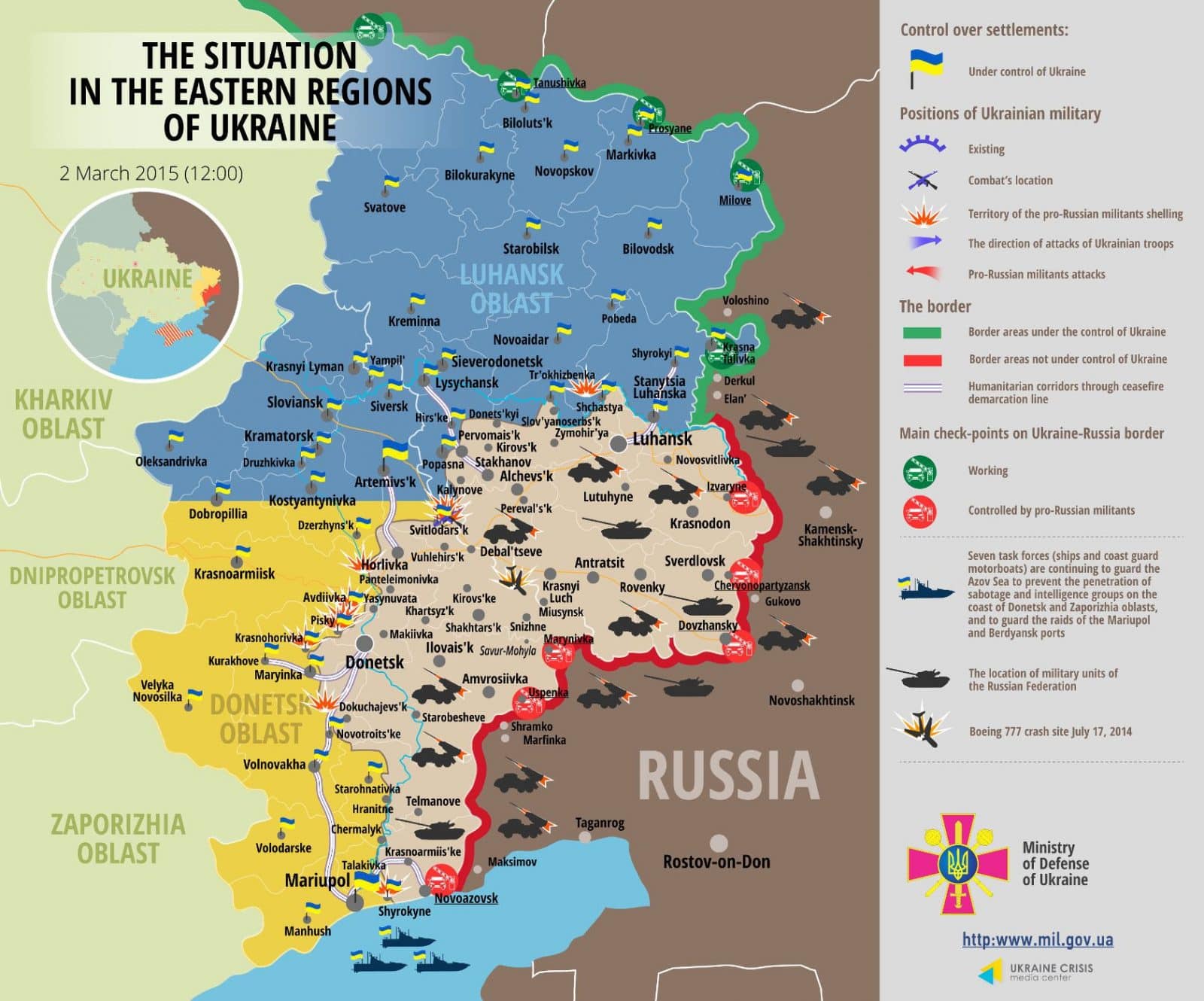 Ukraine’s Security Service detained four informers of the “LPR” in the city of Shchastya who were gathering intelligence about the deployment sites, number of personnel and armaments of the Ukrainian Armed Forces. The detainees were preparing to pass on the list of pro-Ukrainian activists to their masters whose families lived on the temporarily uncontrolled territories. They planned to use the activists’ family members as hostages to blackmail and intimidate the local population. One of the detainees was a fire spotter for the militant artillery forces that shelled the peaceful localities in the Luhansk region.

Russian proxies also redeploy their heavy weapons and military equipment, mostly at the Mariupol direction. 1 Ukrainian serviceman was killed in action and 4 were wounded in the last 24 hours.

Clashes among militants are intensifying. In Donetsk tensions among various criminal groups are mounting caused by their attempts to get hold of oil products at the ruined and abandoned petrol stations. Moreover, due to the delay or absence of the promised payment to the militants based in the city of Krasny Luch, skirmishes have started between the so-called “Russian Cossacks” mercenaries led by Ataman [leader] Kozitsyn and local militant forces.

Most of militant attacks focused on Avdiivka and Pisky. Ukrainian positions came under fire over 10 times. Pro-Russian insurgents used small arms, grenade launchers, mortars and the artillery. Insurgents attacked and tried to storm the Ukrainian positions in the area of Luhanske, Donetsk region. All attacks were repelled.

Russia continues to supply armaments and military equipment to its proxies through the uncontrolled parts of the Russian-Ukrainian border. Geoffrey Pyatt, U.S. Ambassador to Ukraine, confirmed that the United States has ample evidence that proves that Russian officers and generals take direct part in military actions in eastern Ukraine. “We know that Russia is using modern electronic missile guidance systems of the surface-to-air class… Russian regular troops took part in seizing Debaltseve… Russia has sent hundreds and hundreds of pieces of heavy weapons since December,” Mr. Pyatt emphasized.

Colonel Lysenko noted that Ukraine’s State Emergency Service delivered over 40 tons of the humanitarian aid to the cities and towns in eastern Ukraine within the last two days. Residents of Donetsk and Luhansk regions received sugar, flour, pasta, water, vegetables, sweets as well as medical drugs and construction materials.