Kyiv, February 26, 2015 – No attacks have been recorded over the last night. Yet there were still cases of armed provocations instigated by pro-Russian militants, such as the one near Pisky where militants fired at the Ukrainian blockpost and attempted to storm it. Ukrainian soldiers repelled the attack. Russia-backed militants fired at the Ukrainian positions in Shyrokyne at the Mariupol direction. Ukrainian Armed Forces returned fire and destroyed the ammunition arsenal. Ukrainian forces succeeded in eliminating 1 anti-aircraft gun, a fuel truck, and another truck with ammunition and around 10 militants. At least 10 militants were killed as well. 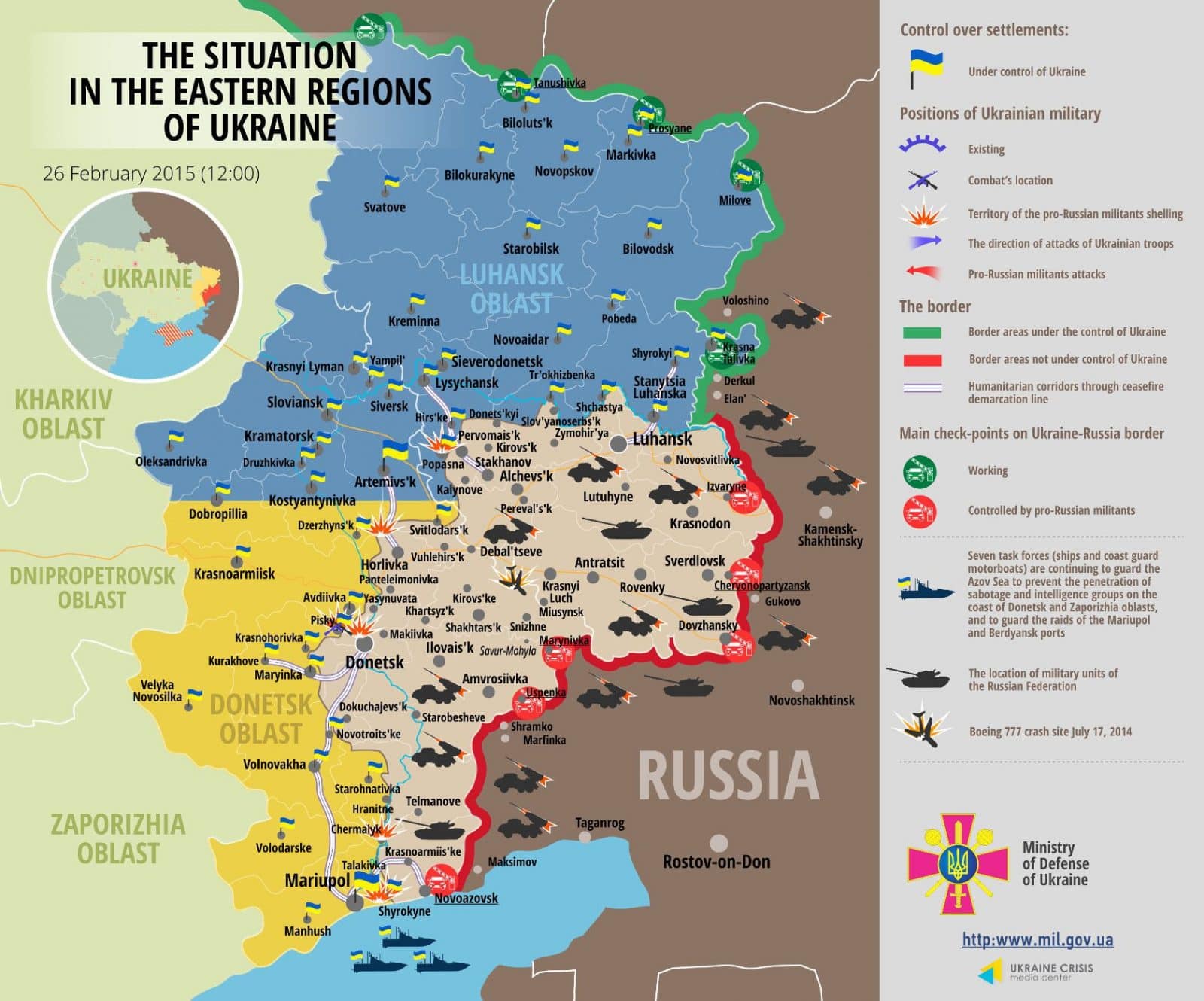 Ukrainian servicemen spotted 7 enemy UAVs at the Mariupol direction, one of them violated Ukraine’s air space in the area of the Azov Sea.

Four Ukrainian servicemen got wounded. Ukrainian Army did not suffer any lethal military casualties in the last 24 hours.

According to the intelligence report, Oleksandr Zakharchenko, leader of the so-called “DPR”, plans to recruit criminal to the militant ranks and send them to build fortifications.

Ukrainian counterintelligence detained four militants in the Donetsk region. One of was among the organizers of the illegal plebiscite on May 11. Ukrainian operatives also confiscated 420 5.45 caliber cartridges, loaded magazines for assault rifles, 16 VOG-25 grenades, as well as military gear, which he planned to use for subversive acts in the Donetsk region. Two other militants collected information on the location of the Ukrainian Armed Forces in the area of Volnovakha and Myronivske, correcting the enemy’s artillery fire.

Ukrainian Emergency Service delivered nearly 10 tons of drinking water and 16.5 tons of food to Dzerzhynsk. UN representatives distributed humanitarian aid, including blankets, warm clothes and construction materials to the resident of Selidove, Donetsk region. Moreover, International Committee of the Red Cross delivered 4.5 tons of food, as well as construction materials to the residents of Myronivka. More humanitarian aid that consisted from 400 matrasses, 400 blankets and 300 baby food sets, as well as drugs and bandages were delivered to the Artemivsk local hospital as well.

Ilkka Kanerva, President of the OSCE Parliamentary Assembly, criticized militants’ actions for violating Minsk agreements, as well as for denying safe access to the OSCE monitors on the militant-held territory.