Kyiv, March 22, 2015. Russia-backed militants have violated ceasefire yet again, instigating armed provocations against the Ukrainian troops along the entire contact line. The militants shelled Ukrainian positions near Avdiivka twice from the artillery, which was supposed to be withdrawn in accordance with the Minsk agreements. They have also mortared Krasnohorivka, Donetsk region. 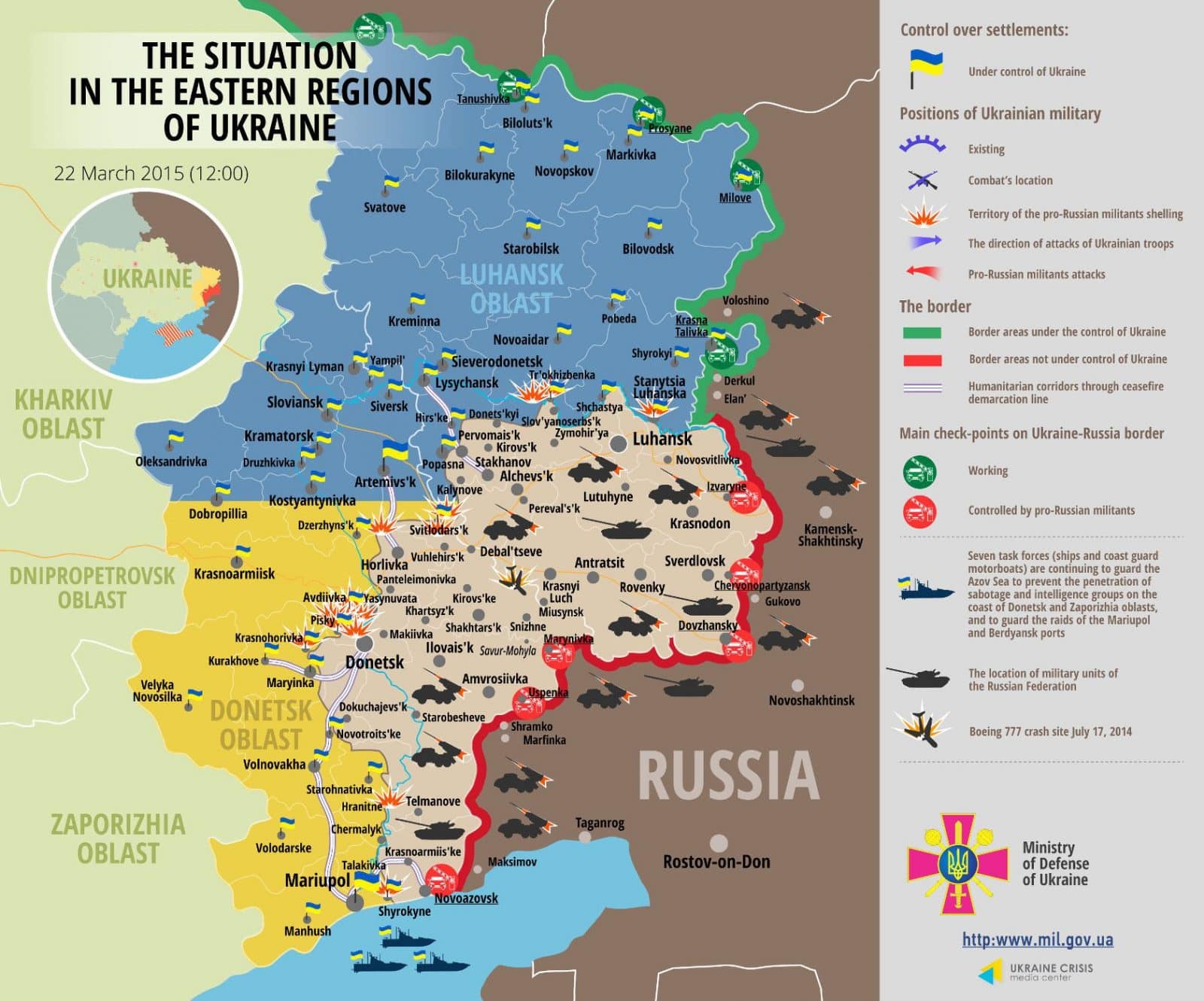 Ukrainian Armed Forces did not suffer any lethal casualties; three servicemen got wounded in the last 24 hours.

The intelligence report stated that Russian military instructors train militant forces in eastern Ukraine, focusing on firing exercises for the artillery units and training of drivers and mechanics of armored vehicles.

The death of Captain Lieutenant Dmytro Labutkin, a 28-years-old Ukrainian military correspondent, was confirmed. He served in Sevastopol, Crimea and did not betray his oath of allegiance to Ukraine after the Russian occupation of the peninsula. Therefore he moved with his family to Odesa. He has perished near Debaltseve about a month ago.

On March 20, two cars exploded after driving over explosives in Popasna district, Luhansk region and in the area of Horlivka respectively. In the former incident one driver died, while the latter tragedy took the lives of a 23-years-old woman and her 3-years-old son. This and many other incidents show how dangerous some of the areas in Donbas have become due to the militants’ activity.

The Ministry of Foreign Affairs of Ukraine has refuted disinformation spread by its Russian counterpart. Russian authorities referred to the report by Reuters news agency that soldiers of the Azov battalion allegedly used D-30 howitzers in the area of Shyrokyne, which is near Mariupol. However, the report clearly stated that the feature has been filmed during the war games near Urzuf village located at the 45 km distance from Mariupol. Ukrainian forces withdrew D-30 howitzers from Shyrokyne under supervision of the OSCE monitors on March 7.

An SBU operative was killed in Volnovakha. The militants seized his rifle and escaped. Several of the suspects were detained except for the killer.

Meanwhile, Ukrainian counter-intelligence detained a turncoat soldier who gathered intelligence about the Ukrainian forces located near Shyrokyne and captured militants, and then transferred it to the pro-Russian forces. Another subversive group was neutralized in Pryvillia, Luhansk region. Russian mercenaries from the “Luhansk People’s Republic” were plotting to explode a school and the local recreational house. Ukrainian operatives confiscated ten mortar mines from them. Furthermore, three militant spies were detained in the Donetsk region, while one artillery fire spotter captured in Krasnohorivka.