Kyiv, April 25, 2015. A car carrying “DPR” fighters tailed the convoy of the OSCE Special Monitoring Mission and used it as cover in order to reach militant-held positions in the eastern edge of Shyrokyne village. Such bold violations of the peace treaty endangers the lives of international observers further. 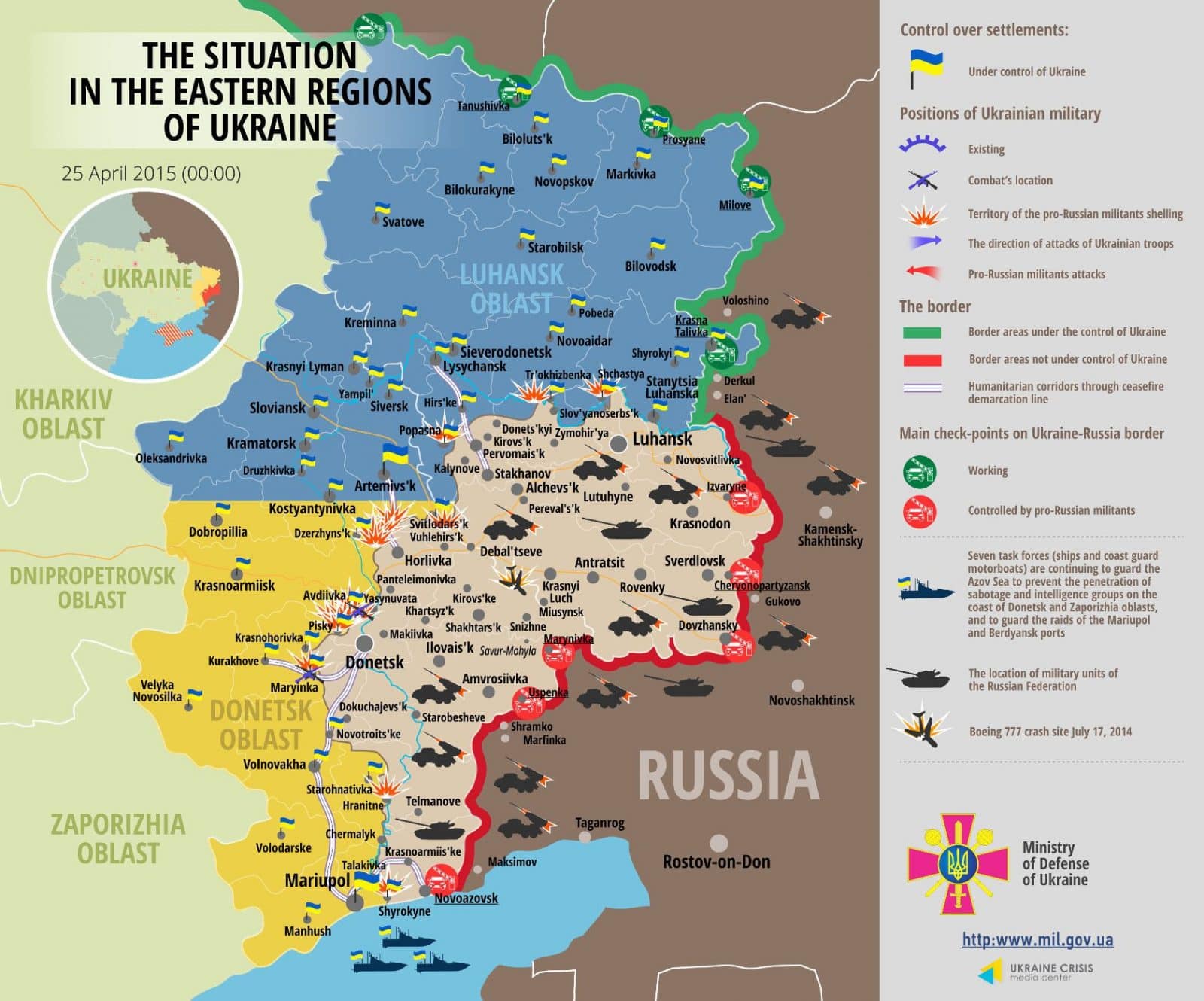 Russia-backed insurgents have shelled Ukrainian military positions from 122-mm mortars 17 times, and once from the 122-mm artillery. The artillery shelling took place in the area of Zaytseve, Donetsk region.

Major hotspots in the Donetsk sector included towns around the Donetsk airport –Avdiivka, Pisky, Opytne and Vodyane – and the outskirts of Horlivka. Ukrainian Armed Forces fought off two militants’ attempts to storm the positions near Maryinka and Putylivska mine. Furthermore, militants were active near Shyrokyne and Shchastya and Sokilnyky in the Mariupol and Luhansk sectors respectively.

One Ukrainian serviceman was killed in action and two got wounded in the last 24 hours.

Pro-Russian militants declared their intentions to hold a military parade in Donetsk on May 9. The event serves as another element of spreading Russian propaganda among the veterans of the Second World War. The parade is about to take place despite objections of the OSCE, as the presence of military equipment in the city would violate Minsk agreements.

On the other hand, Lviv volunteers repaired an armored personnel carrier BTR-80 for the Ukrainian troops. Also, citizens all across the country donated yet another batch of warm clothes and military gear to the Ukrainian soldiers on the frontline.

Ukraine’s Border Guards detained one individual suspect in separatist activities, while he was trying to leave Ukraine by bus, travelling from Severodonetsk to Pskov. Meanwhile, Ukraine’s Security Service eliminated a data-center that spread messages to finance pro-Russian militant groups among residents of the Kharkiv region. Two individuals who were gathering cash for pro-Russian fighters are wanted by the Ukrainian law-enforcement.