Kyiv, February 15, 2015. The situation in Donetsk and Lugansk regions remains extremely difficult. The combat activity of the illegal armed groups went down starting midnight February 15, 2015, when the truce stipulated by the agreements achieved in Minsk was announced and went into force. The enemy forces focused its attacks on the area near the towns of Debal’tseve and Shyrokine. Since the beginning of the ceasefire terrorists 10 times initiated fire from the artillery, grenade launchers, mortars and small arms against our military positions. 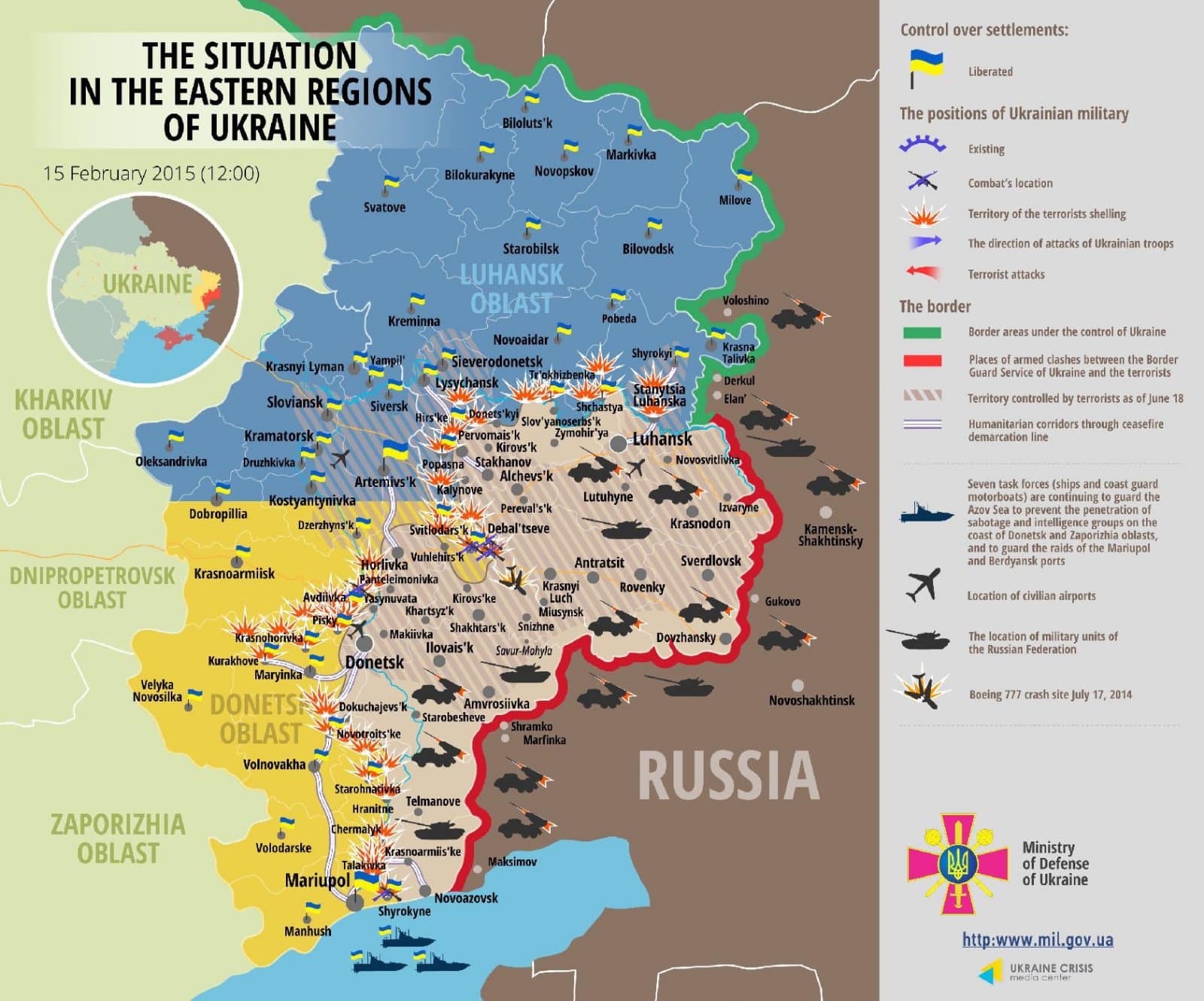 The insurgent units have been noticed to relocate their forces including personnel and weapons from the towns of Horlivka, Vuhlehirsk, Verhulivka and Zorynsk toward the demarcation line.

During the last 24 hours the maneuvering forces of the pro-Russian militants with the artillery support from the units of the Armed Forces of the Russian Federation made attempts to surround the town of Debaltseve, Donetsk region and block road connections. The courage and professionalism of our soldiers did not allow the enemy to implement their plans. He also noted that the militants were engaged in combat operation in the vacinity of Shyrokine, Volnovakha district, Donetsk region, which is not far from Mariupol. Ukrainian military withstood all attacks and successfully held their positions.

During violent confrontations the illegal armed groups have suffered substantial losses, according to ATO press center. Reportedly, in the last two days the insurgents lost over 600 troops, 200 were wounded. The enemy forces have lost about 30 units of weapons and military equipment.

Last night, nine Ukrainian soldiers were killed, 39 were wounded. ATO forces suffered no casualties since the announcement of the ceasefire on February 15 at 00.00.

The militants continue to conduct aerial reconnaissance using unmanned aerial vehicles. Five UAV flights have been registered not far from the city of Mariupol.

Civilians continue to die because of criminal attacks by terrorists against Ukrainian cities. For the past day at least four people were killed in towns of Sartana and Artemivsk, Donetsk region and the city of Popasna, Luhansk region.

In Donetsk region Ukrainian security service captured a subversive group which was a part of the illegal military formation “Somalia” under the leadership of the so-called “Givi”. They committed armed attacks against the units of ATO forces in Donetsk airport. Five militants were arrested. They were armed with rifles, PK and RPK machine guns, carrying ammunition and sabotage devices.