Kyiv, February 14, 2015. Armed confrontation between the Russian regulars and Pro-Russian insurgent groups and Ukrainian Armed Forces has escalated. Militants keep moving additional forces to the territory of Ukraine, amassing military equipment and ammunition. They are supported by the professional soldiers of the Russian Federation. Militants are trying to fulfill important tactical goals and expand territories under their control until 00:00 15 February. Seizing Debaltseve is paramount to the insurgents. Fierce fighting near Debaltseve continues. Militants shelled the positions of the Ukrainian forces over 16 times with Grad multiple rocket launchers, as well as with the artillery, mortars and tanks. According to the ATO press center, Pro-Russian suffered serious casualties, losing almost 100 of their men; other 180 got wounded in the last 24 hours. Ukraine lost 7 servicemen, while other 23 were wounded in action. 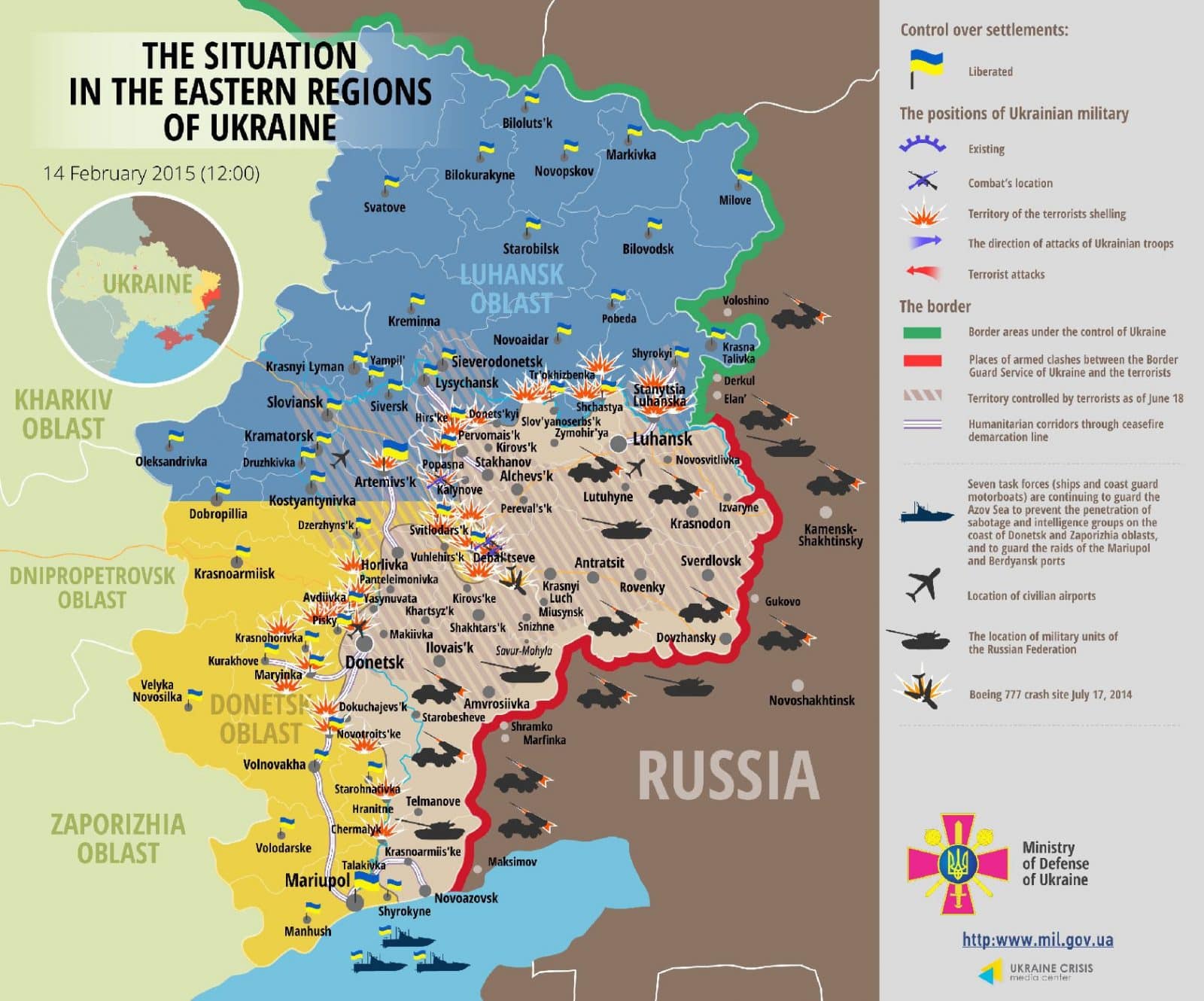 Ukrainian Armed Forces repelled the attack of the Russian and insurgent forces in the area of Chornukhyne, Troyitske and Mius villages in the Luhansk region. Ukrainian artillerymen destroyed the MT-12 Rapira anti-tank gun that militants intended to use to fire at the town of Shyrokyne. In addition, our artillery regiments destroyed 2 enemy mortar crews. Taking into account militants’ considerable losses, another so-called “humanitarian convoy” from the Russian Federation to Donbas is scheduled to depart to Ukraine on 15 February. The convoy’s cargo is delivered from the Moscow region to Rostov by aircraft, and not by cars as it used to be earlier.

Ukrainian forces spotted 14 flights of enemy UAVs at the following directions: Mariupol-Sartana, Sartana-Talakivka, Sartana-Hnutove, Hnutove-Pavlopil, Sartana-Myrne, Mariupol-Hnutove, Yalta-Mariupol, Zorya-Hranitne, Hranitne-Zorya, Zorya-Kyrylivka, Blahodatne-Kostyantynivka. Furthermore, Ukrainian border guards spotted a helicopter without insignia, violating Ukraine’s airspace. It transpassed 2500-3000 m deep into the territory of Ukraine at the height of 400 m, and then returned back to the territory of the Russian Federation at 9:35 am yesterday near Krasna Talivka, Luhansk region

Pro-Russian militants shelled the residential district of Artemivsk, Donetsk region, yesterday. The city is located over 30 km away from the frontline. Three civilians were killed as a result of the shelling, including a 7-year old child and his mother. Several more persons including children were wounded. According to the preliminary information, the rockets were launched from around Popasna of the Luhansk region. 6 people were killed in Shchastya as militants shelled the town with Grad multiple rocket launchers. 5 more people were killed and 7 wounded in Hirnyak town due to the insurgent shelling. In Avdiivka, following the artillery shelling by militants, a local female resident was found dead on the street. These people did not take up arms. Yet another time militants violated the Geneva Convention that prohibits military action against civilians. It further demonstrates that the Russian regulars and militant groups continue their aggression against Ukraine despite the new Minsk agreements.