National Security and Defense Council: 2 Ukrainian servicemen were killed within the last day

Kyiv, 2 December 2014 – Within the last day illegal armed groups fired at the anti-terrorist operation (ATO) forces 52 times, resulting from that 2 Ukrainian servicemen were killed, 4 got wounded. 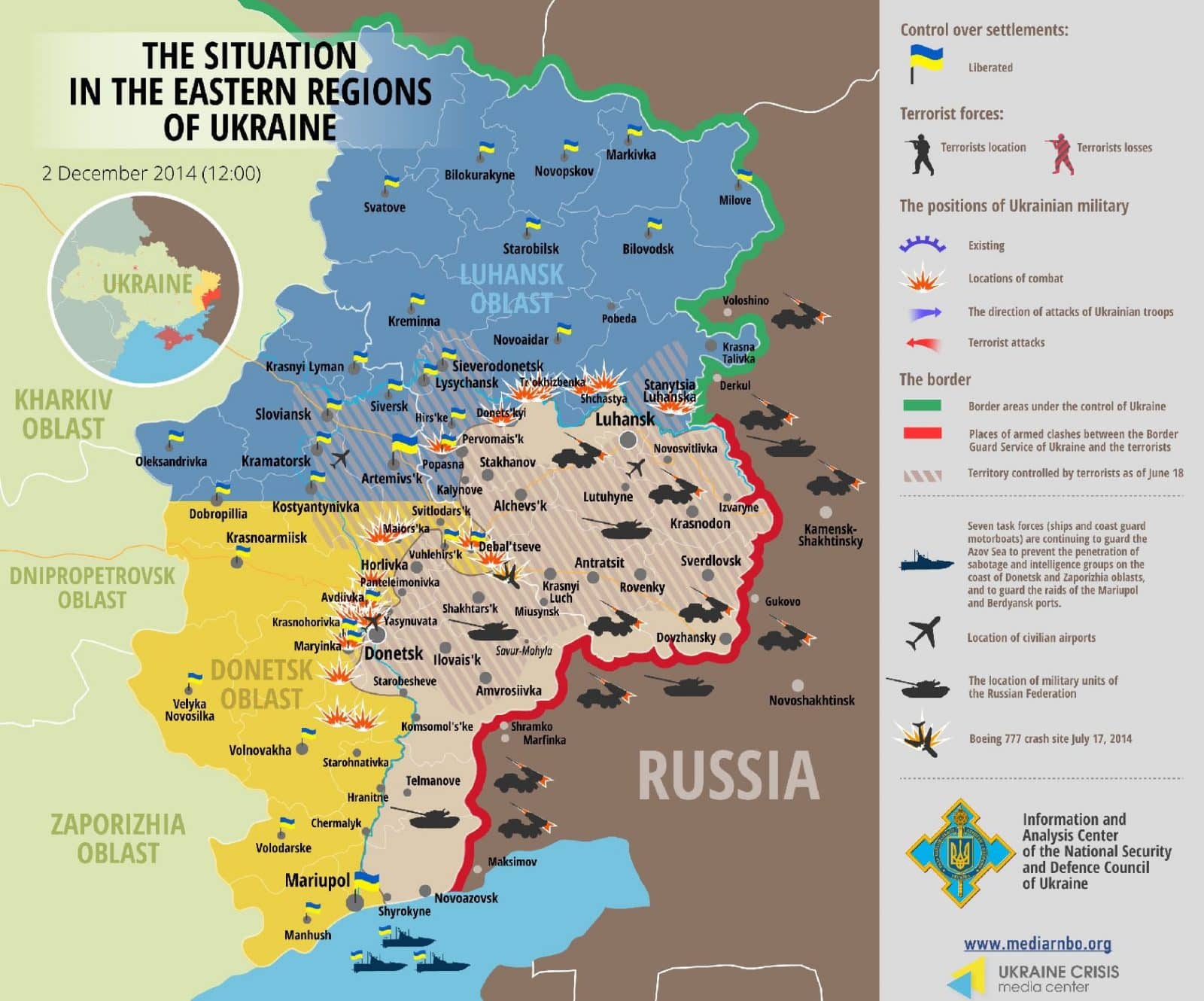 At 7 am at the Donetsk direction Ukrainian servicemen repelled another storm of the airport. The enemy suffered losses resulting from the actions of Ukrainian artillery and from the surprise short-range fire of the troopers. Terrorists fired at the ATO forces positions several times from artillery and mortars near population centers Pisky, Tonenke, Avdiivka, Slavne and Nevelske. Militants struck strongholds near Novobakhmutivka village with Grad multiple rocket launcher systems (MRLS) and mortars. At the Luhansk direction outside Stanytsia Luhanska another attack on a platoon stronghold of the Ukrainian servicemen was repelled, it started after the mortar shelling. At the same direction positions of our servicemen near Shchastya were twice shelled by militants from Grad MRLS and twice with artillery and mortars. A stronghold near Makarove village of Stanychno-Luhansky district was also shelled with Grad four times.

No combat engagements occurred at the border. Aerial reconnaissance by the Russian Federation Armed Forces at Ukraine’s Northern borders in Chernihiv region was spotted. Yesterday at 17:15 a border guard detachment near Semenivka border crossing point spotted a UAV that entered the Ukrainian territory from Russia and penetrated 1 km deep. The UAV was fired upon by the border guards and returned back to the air space of the unfriendly state.

President of Ukraine Petro Poroshenko and the German Chancellor Angela Merkel discussed the situation in Donbas and the issue of humanitarian aid and energy supply in particular. The parties stressed on the need to implement the Minsk accords on the way to peaceful settlement. It was noted that it is important to continue consultations in the framework of the Trilateral contact group.

New President of the European Council Donald Tusk and the US President Barack Obama urged Russia to withdraw its troops from eastern Ukraine. “We shared our concerns over the crisis in Ukraine and agreed on how important it is for Russia to withdraw from eastern Ukraine, to stop supplying troops and equipment, to allow effective control of the border,” stated Donald Tusk.

NATO Secretary General Jens Stoltenberg ahead of the meeting of heads of foreign ministries of the Alliance member states in Brussels on 2-3 December stated that NATO will not provide any formal or informal guarantees to Russia in respect of the non-membership in the Alliance of Ukraine and Georgia as the issue needs to be decided exclusively by these countries.