Kyiv, 16 March 2015 – Ukrainian Armed Forces have successfully finished the de-mining of Kominternove in the Donetsk region. Ukrainian minesweepers neutralized several mortar mines, 4 tank projectiles, anti-tank shells and 2 missiles from “Uragan” multiple rocket launchers. Ukrainian military worked in close collaboration with the OSCE mission in Ukraine to conclude a deal in order to clear up the town. 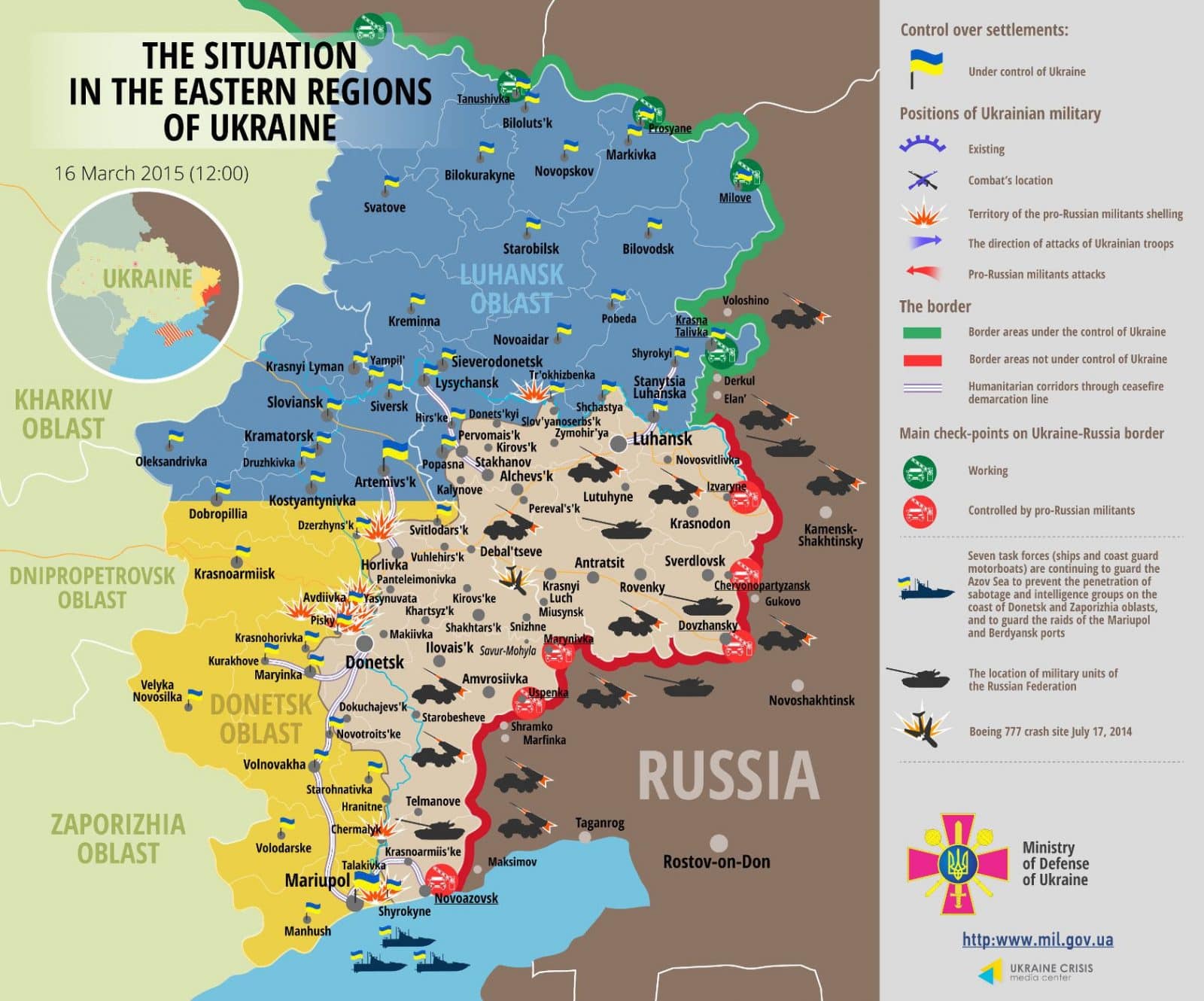 No cases of artillery use were recorded over the last day. However Russia-backed militants used small arms, grenade launchers, mortars and armored vehicles to instigate armed provocations in the areas on the eastern edges of the Mariupol sector, areas around the Donetsk airport, as well as Mayorsk, Horlivka and Sokilnyky village. The enemy also fired twice at Pisky, using small arms and grenade launchers. Pro-Russian militants also attacked Ukrainian positions near Shyrokyne and Avdiivka after midnight on March 16.

One Ukrainian serviceman was killed in action over the last 24 hours.

Furthermore, Volodymyr Kochetkov-Sukach, a renowned Ukrainian volunteer of the “Aerorozvidka” (Aerial reconnaissance) group was killed yesterday in the area of Krasnohorivka, Donetsk region. Volodymyr participated in the Revolution of Dignity and was one of the first volunteers who confronted the separatists in Mariupol on May 9, 2014. He used to design UAVs for our military and interpreted aerial reconnaissance intelligence.

Militants conduct information provocations as well. Thus they are spreading fabricated information about active combat actions along the entire contact line. The intelligence reports that Russia continues to supply its proxies via rail. Trains with ammunition arrive daily to the Krasnodon railway station. Russian regulars and pro-Russian militants consolidate forces, military equipment and the artillery systems in the area of Shchastya and in the Mariupol sector.

Jens Stoltenberg, NATO Secretary General, also confirmed that the Russian Federation keeps moving its forces across the Russia-Ukraine border, as well as trains its mercenaries in eastern Ukraine.