Kyiv, 13 March 2015 – No Ukrainian servicemen were killed in action in the last day, while 2 soldiers were wounded.

Meanwhile Russian regular army officers who have served in the Russian Federation Armed Forces and participated in combat actions, continue training militants in the East of Ukraine. According to intelligence data only 15-20% in Russian-backed illegal criminal groups are Ukrainian citizens, the rest are Russian mercenaries. 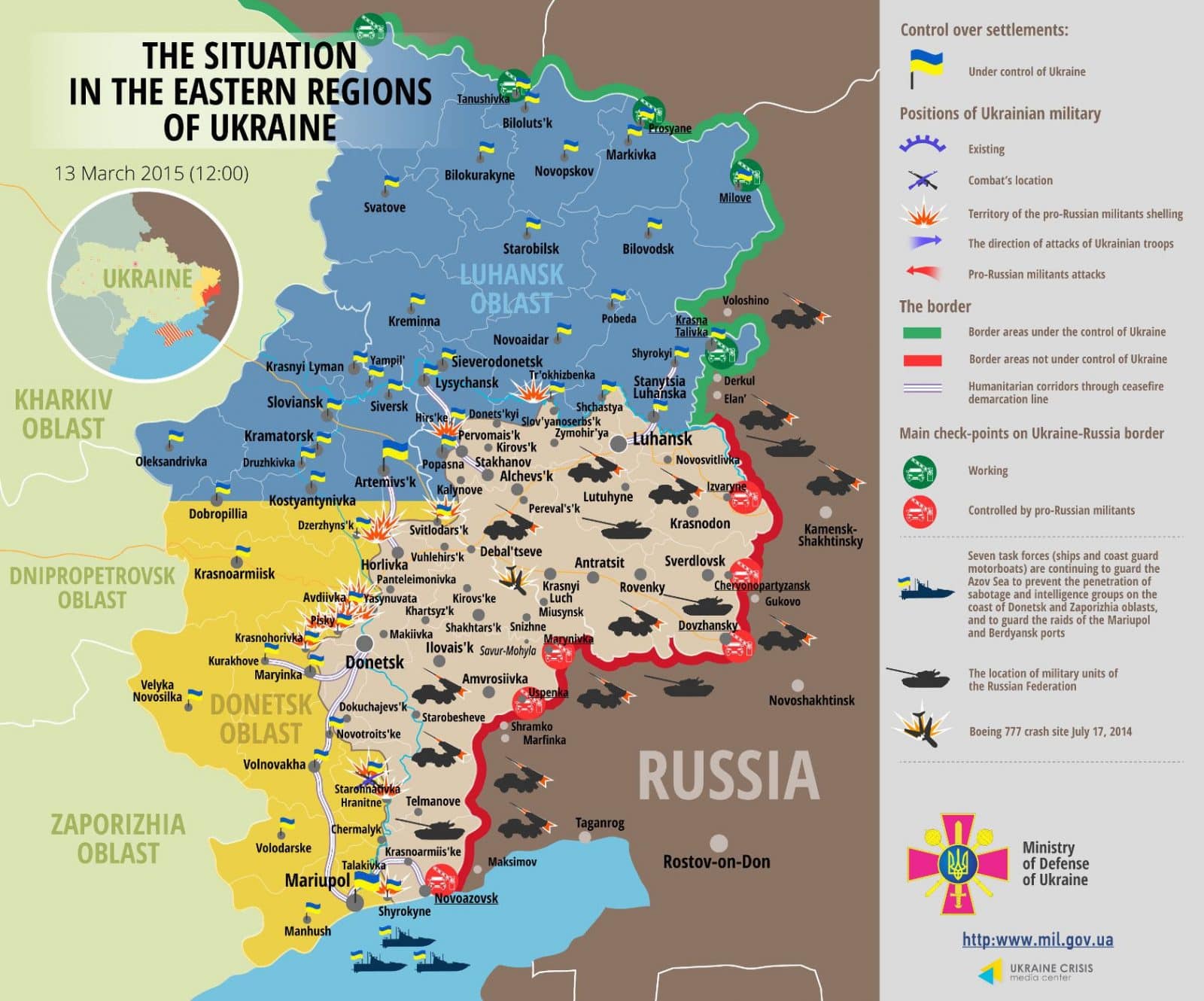 Separatists keeps building up its forces at all main directions. In the last day the enemy fired at Ukrainian positions in the ATO zone 58 times, twice they have fired at the populated areas. The village of Shyrokyne outside Mariupol and Pisky near Donetsk remain the hottest spots. Ukrainian servicemen repelled the militants’ assault attempt in Starohnativka area of Volnovakha district in Donetsk region. After midnight Ukrainian positions near Pisky town were fired upon twice.

Illegal armed groups imitate withdrawal of heavy weaponry from the delimitation line: militants’ equipment is moving in circles or hiding in the premises of industrial sites and at remote rural areas. Heavy weaponry withdrawal under OSCE observation is a requirement of the Minsk agreements, which Ukraine is strictly complying with.

Meanwhile the ATO Staff is reviewing the documents submitted for the reward payments for destroyed 210 units of the enemy’s military equipment including 29 destroyed and 1 captured tank. Servicemen of the 128th mountain-infantry brigade received UAH 85 200 for having successfully completed a combat task and destroying 2 combat armored vehicles of the enemy.

Over the last day Ukrainian servicemen spotted flights of 4 UAVs near Shyrokyne and Stanytsia Luhanska.

Discontent of the local civilians is growing at the territories temporary out of governmental control as people our outraged by activities of Russian-backed illegal criminal groups, including looting, robberies, seizure of businesses and organizations. At the same time militants are compiling lists of workers from plants and mines for further forced military recruitment into the illegal criminal groups.

Ukrainian border guards seized explosives, an F-1 grenade and Russian Federation insignia from a detained member of the so-called “DPR” illegal criminal group near Horlivka. On 12 March an operations group of Ukraine’s Security Service together with the police detected a self-made explosive at the Lysychansk-Artemivsk highway. In Artemivsk and Kostyantynivka Ukrainian law enforcement agencies have neutralized arsenals of weapons that included grenades, components for explosives and ammunition.