Kyiv, May 8, 2015. Pro-Russian militants damaged a gas pipeline in the area of Shchastya and Stanytsia Luhanska, leaving 13,000 civilians without gas supply. Currently the situation in the Luhansk sector remains tense in Sokilnyky and Zolote villages. 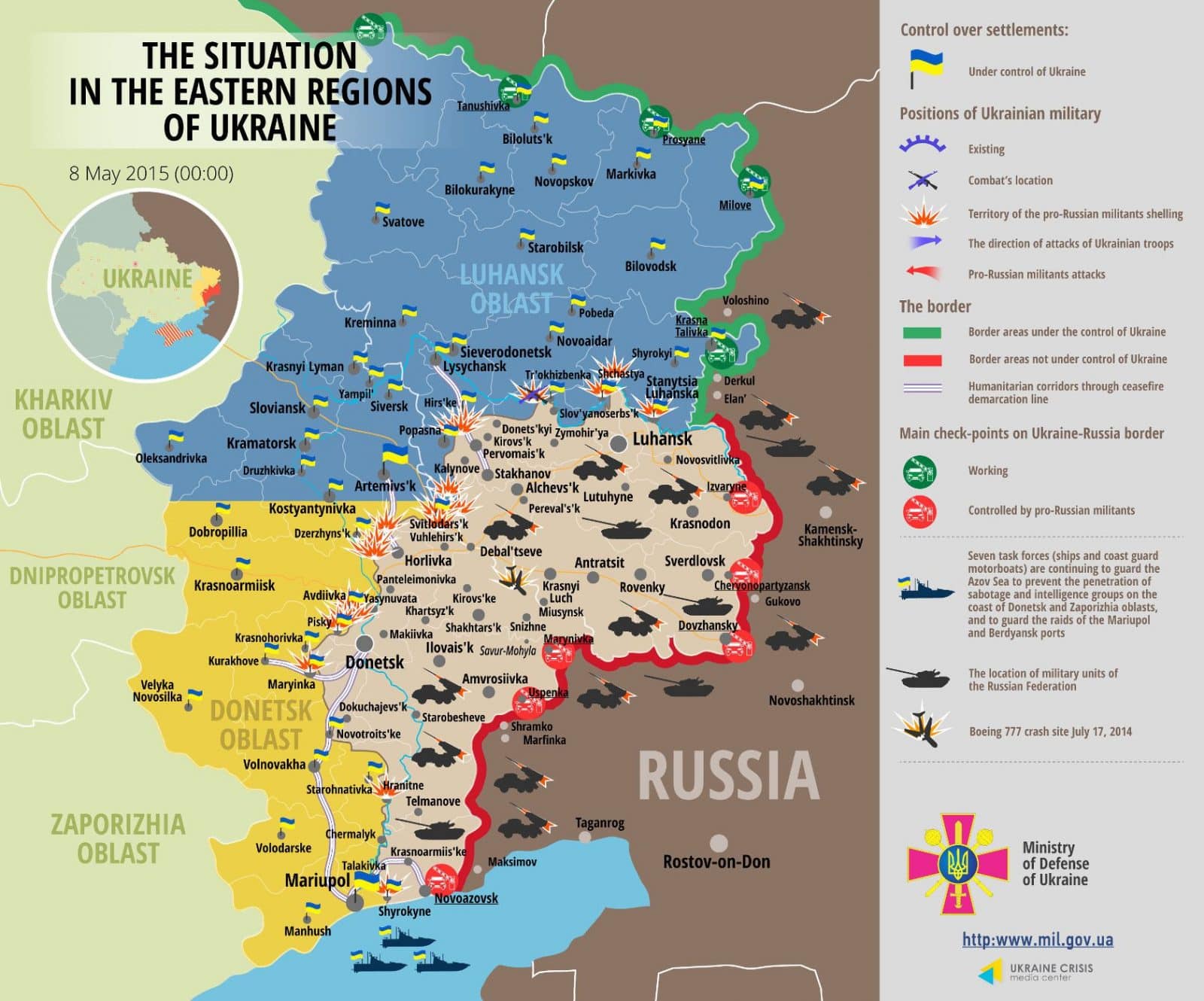 Militants shelled the Ukrainian military positions 17 times from 120-mm mortars and ten times from the 122-mm artillery over the last day. As the heavy weapons are being used along the entire combat line – from Shyrokyne to the Russian border – it demonstrates that the enemy wants to deliberately undermine Minsk agreements.

Shyrokyne village and the outskirts of Horlivka, namely Mayorsk, Dzerzhynsk and Svitlodarsk, have been the hotspots of the conflict in Mariupol and Donetsk sectors respectively. Russia-backed fighters used mortars, tanks and the artillery in these areas. One civilian was injured as a result of the militant shelling of Dzerzhynsk. Other sites of confrontation included Avdiivka, Pisky and Maryinka.

Ukrainian border guards were forced to temporarily suspend access through the checkpoints in the area of Maryinka due to the massive shelling of “Maryinka” block post that endangered the lives of civilians.

Two Ukrainian servicemen were killed in action and 26 got wounded in the last 24 hours.

Ukraine’s Security Service sent 13 bills for court review pertaining to participation of Russian citizens in the ranks of the “DPR” and “LPR” militant groups and their involvement in the murders of Ukrainian citizens. Six Russian citizens involved in these crimes have been put under arrest already.

Official events marking the Remembrance and Reconciliation Day and the 70th anniversary of the victory over Nazism in World War II took place in Ukraine. Residents of Chernihiv congratulated war veterans of the 1st Guards Red Banner Army. In Odesa, students of the Military Naval Lyceum and the Military Academy cadets together with the World War II veterans commemorated soldiers who had fallen in the course of the Anti-Terrorist Operation.