Avdiivka remained the main “flashpoint” in the last 24 hours. A series of Russians’ mortar attacks was registered there yesterday. The enemy shot from a tank one and fired one fourth of ammunition load from Grad multiple rocket launcher system at our strongholds in the industrial area. In total, combat in Avdiivk and its flanks lasted over 10 hours yesterday according to the spokesman of the Ministry of Defense of Ukraine on ATO related issues Colonel Andriy Lysenko. 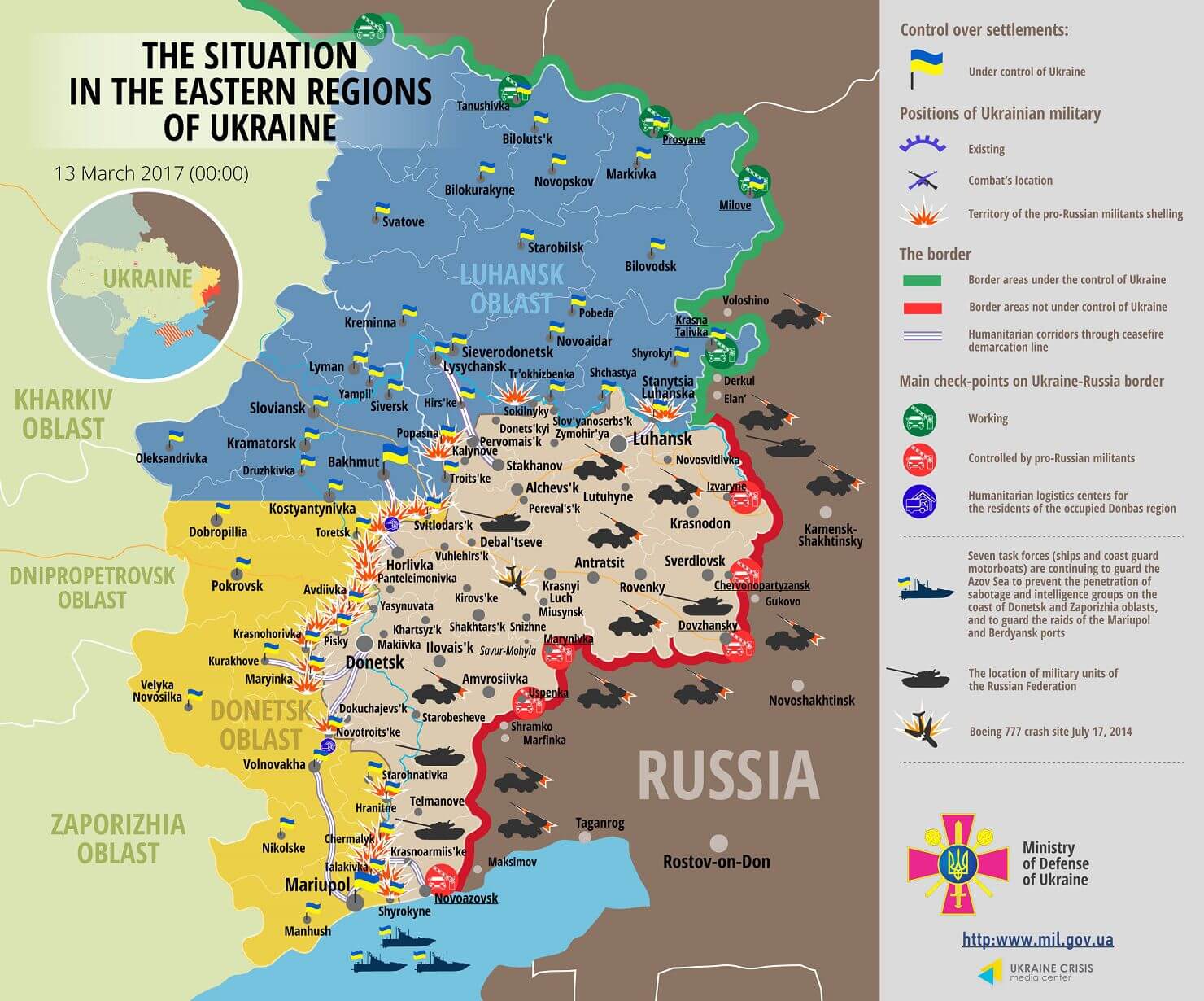 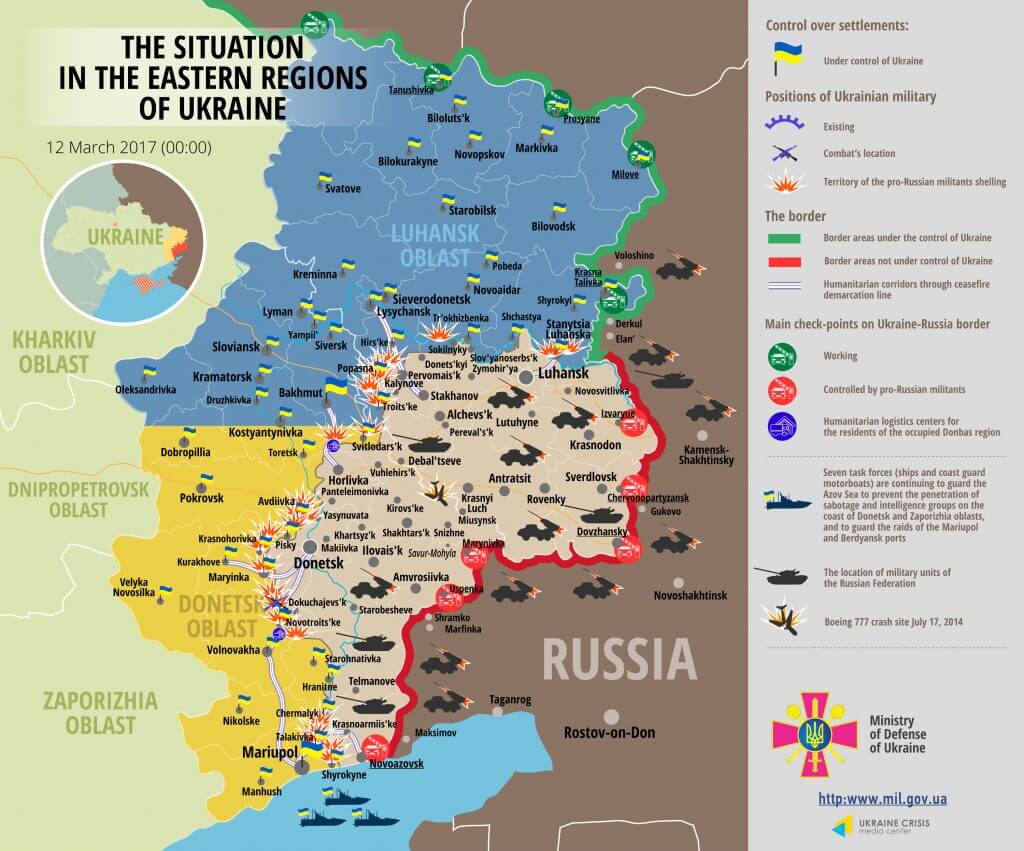 ”In the Mariupol sector, the occupiers fired 120mm mortars on the Ukrainian positions near the towns of Maryinka and Krasnohorivka, and the villages of Shyrokyne and Novotroyitske. In addition, Shyrokyne was attacked with a tank. The Russian occupation forces also used 82mm mortars, heavy machine guns and grenade launchers against the village of Hnutove, as well as infantry fighting vehicles and tripod-mounted man-portable antitank guns in the village of Vodiane. Furthermore, the villages of Pavlopil and Chermalyk came under fire from large-caliber machine guns and grenade launchers of various systems,” the report says.

In the Donetsk sector, the situation was tense in the town of Avdiyivka, where the enemy opened fire from small arms, heavy machine guns, grenade launchers of various systems, mortars and tanks. At about 19:00 Kyiv time, the Russian troops also started using Grad MLR systems. The occupiers fired 82mm mortars on the Ukrainian fortified positions near the villages of Nevelske, Verkhniotoretske, Zaitseve, Opytne and Kamianka, as well as infantry fighting vehicles and tripod-mounted man-portable antitank guns on the defenders of Butivka coal mine. Moreover, 120mm mortars were used to shell the village of Luhanske.

In the Luhansk sector, the Russian-backed invaders fired heavy machine guns and grenade launchers on the Ukrainian positions near the villages of Valuiske, Novo-Oleksandrivka and Novozvanivka, and 120mm mortars near the village of Krymske.

The ATO forces fired back to decrease the enemy`s fire activity.

Russia`s hybrid military forces attacked Ukrainian army positions in Donbas 107 times on March 11 with two Ukrainian soldiers reported as killed in action (KIA) and nine as wounded in action (WIA), according to the press service of the Anti-Terrorist Operation (ATO) Headquarters. 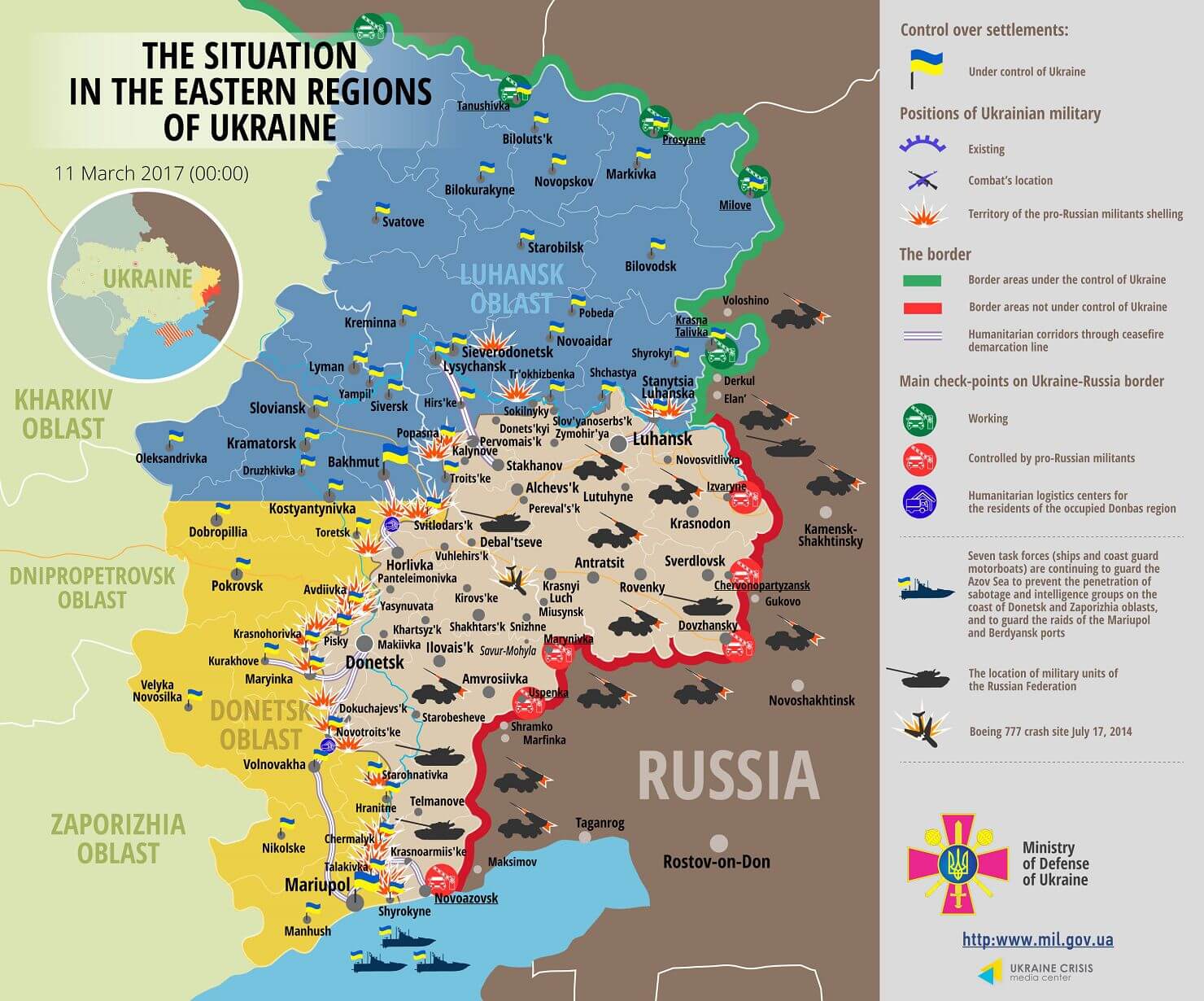 In the Mariupol sector, the enemy used 122mm artillery systems in the villages of Vodiane and Hnutove. The town of Maryinka came under fire from a tank and 120mm mortars. The Russianmilitants also used 120mm and 82mm mortars in the town of Krasnohorivka, and the villages of Vodiane, Mykolaivka, Talakivka, Pavlopil and Hnutove, as well as grenade launchers, heavy machine guns and small arms on the villages of Taramchuk, Shyrokyne, Pavlopil and Vodiane. Additionally, infantry fighting vehicles were used to shell Vodiane.

In the Donetsk sector, the Russian occupation forces opened fire from tanks and mortars on the Ukrainian positions near the town of Avdiyivka. They also used mortars of various calibers in the villages of Kamianka, Nevelske, Zaitseve, Novoluhanske, Luhanske and Butivka coal mine. In addition, the Russian militants fired grenade launchers and small arms on the villages of Opytne, Novhorodske, Kamianka, Zaitseve, Pisky and Butivka coal mine. Moreover, Luhanske came under fire from infantry fighting vehicles.