Combined Russian-separatist forces attacked Ukrainian army positions in eastern Ukraine 25 times from 00:00 to 18:00 on Friday, December 30, according to the Anti-Terrorist Operation (ATO) Headquarters. 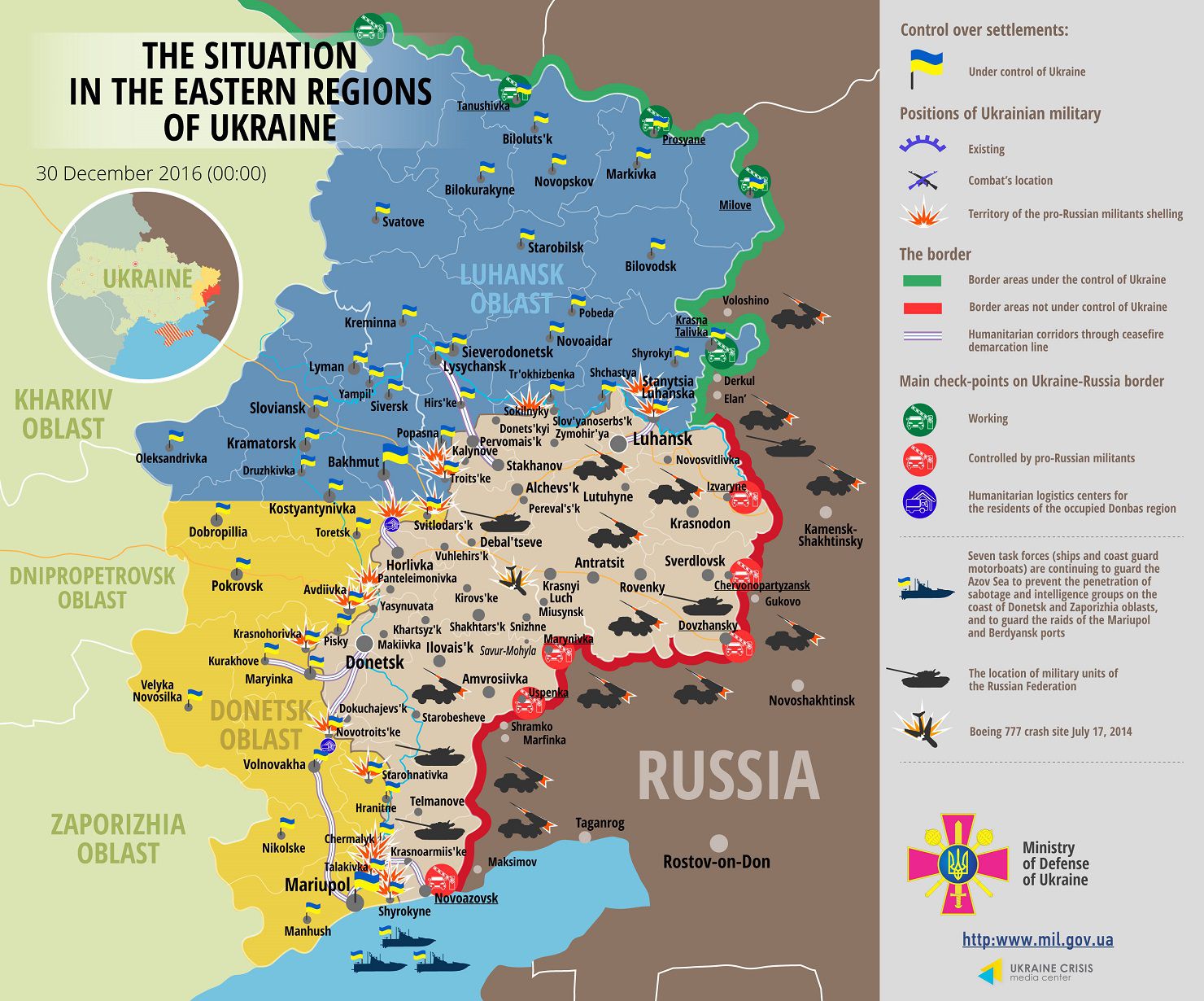 Russia`s hybrid military force continued to attack the Ukrainian positions in all sectors. In the Mariupol sector, the militants fired 120mm and 82mm mortars on the villages of Shyrokyne and Talakivka, as well as heavy machine guns and small arms on the town of Maryinka, and the villages of Shyrokyne, Lebedynske and Hnutove, the ATO HQ said in an evening update.

In the Luhansk sector, the occupiers used 82mm mortars on the village of Novozvanivka. They also fired rocket-propelled grenades, heavy machine guns and small arms on the villages of Pavlopil, Novozvanivka, Nova Kondrashivka, Chervone Hnylyshche and Novo-Oleksandrivka.

At the same time, in the Donetsk sector, the militants opened fire from small arms on the villages of Pivdenne and Opytne.

”A skirmish took place near the town of Popasna. At about 16:00 Kyiv time, the enemy attacked the Ukrainian observation post. The attack was repulsed, the enemy suffered losses and retreated,” the report says.

Ukraine`s chief military prosecutor Anatoliy Matios has told about the number of wounded at the front – eight Ukrainian soldiers.

”Eight servicemen are the losses at the front,” Matios wrote on Facebook.

”In the last day, three soldiers were wounded in action (WIA), other five were non-combat losses (one suicide, four cases of careless handling of an RGD-5grenade). This is a war and its consequences are terrible,” he added.

At the same time, Defense Ministry speaker for Anti-Terrorist Operation issues Oleksandr Motuzianyk has said that he could not confirm the information by the chief military prosecutor about the loss of eight soldiers in the Donbas conflict zone, Radio Liberty reported.

”I cannot confirm this at the moment. Because we did not record such combat losses in the past 24 hours. As of 16:00 Kyiv time, we know about one wounded soldier,” Motuzianyk said.

See also: Ukraine to shoot down aircraft breaching its airspace – Cabinet of Ministers