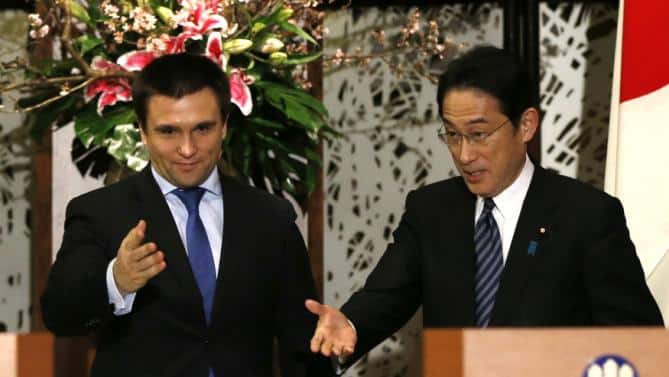 It is the first visit by a Ukrainian minister to Japan since Russia annexed Crimea in 2014. Pavlo Klimkin arrived in Japan on Monday, March 2, 2015 for three days.

Honored to meet with Japanese Prime Minister. Extremely positive and insightful meeting. We are on the same page.

Ukraine’s Foreign Minister Pavlo Klimkin visits Japan to discuss the amount of Tokyo’s humanitarian and financial aid for Ukraine, cooperation for a settlement of the conflict in Eastern Ukraine and a response of Russia’s war crimes. There will be discussed the ways Japan can help restore Ukraine’s economy especially in agricultural industry.

Ukraine can also give a help in reconstruction of the Fukushima nuclear station.

In Kyiv on February 5, Ambassador of Japan to Ukraine Shigeki Sumi and Ukraine’s Minister of Economy and Trade Aivaras Abromavicius  signed an agreement on protection of investment.

Besides, Japan provided $ 1.5 billion of financial assistance to Ukraine and intended to provide Ukraine with additional financial aid package worth $300 million to replenish foreign exchange reserves of the National Bank of Ukraine.