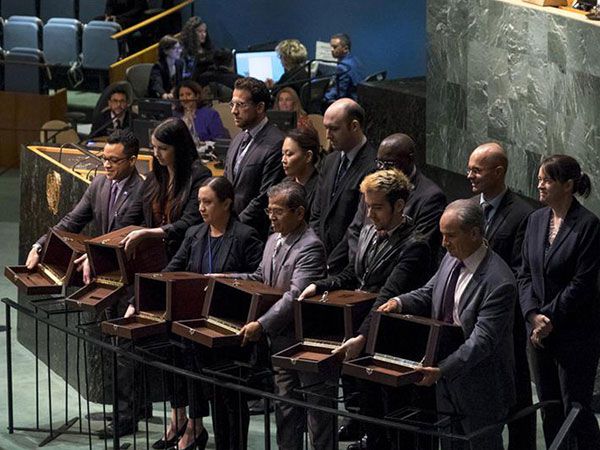 Conference officers hold up empty ballot boxes for inspection prior to the vote to elect five non-permanent members of the Security Council. UN Photo/Cia Pak

UN News Centre informs on the official website that on 15 October 2015 in one round of voting the United Nations General Assembly today elected Egypt, Japan, Senegal, Ukraine and Uruguay to serve as non-permanent members on the Security Council for two-year terms from 1 January 2016 until 31 December 2017.

The five permanent Council members, which each wield the power of veto, are China, France, Russia, the United Kingdom and the United States. The non-permanent members that will remain on the Council until the end of 2016 are Angola, Malaysia, New Zealand, Spain and Venezuela.

Congratulations to the new member of the #UN Security Council: #Ukraine gets 177 votes! @mfa_ukraine @sergiy.kyslytsya

“The Security Council takes the lead in determining the existence of a threat to the peace or act of aggression. It calls upon the parties to a dispute to settle it by peaceful means and recommends methods of adjustment or terms of settlement. In some cases, the Security Council can resort to imposing sanctions or even authorize the use of force to maintain or restore international peace and security.”

The Security Council also recommends to the General Assembly the appointment of the Secretary-General and the admission of new Members to the United Nations. And, together with the General Assembly, it elects the judges of the International Court of Justice.