Permanent Representative of Ukraine to the United Nations (UN) Volodymyr Yelchenko has addressed UN Secretary General Antonio Guterres with a letter against the background of the escalation in Donbas and the shelling of Avdiivka in Donbas by Russian militants, according to Volodymyr Yelchenko’s official Twitter page.

“We demand from the Russian Federation to cease hostilities immediately and to comply strictly with the cease-fire,” the letter reads. 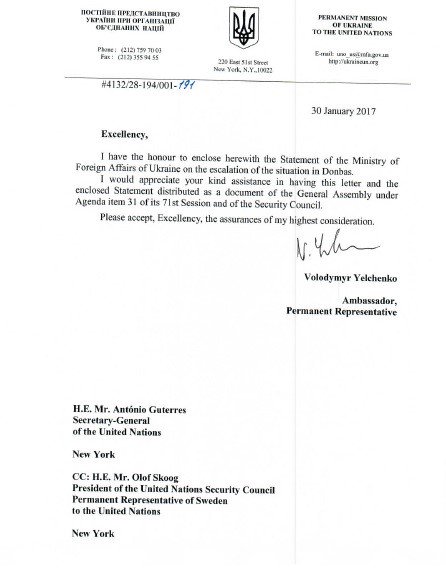 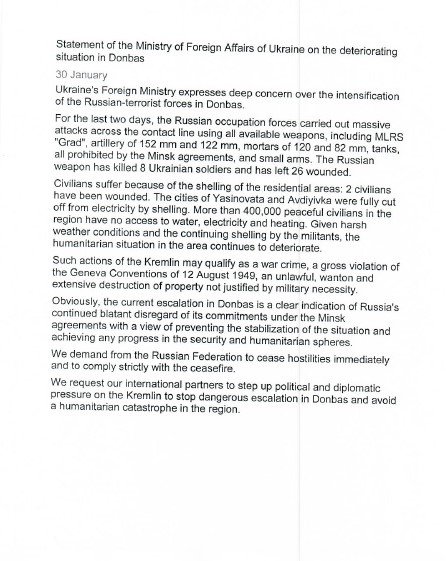 Volodymyr Yelchenko reports about massive attacks by the Russian militants using all available weapons, including MLRS “Grad” for the last 2 days, eight Ukrainian troops were killed.

“For the last two days, the document notes, Russian occupation forces have carried out massive attacks along the demarcation line, using Grad rocket systems, 152 mm and 122 mm artillery, 82 mm and 120 mm mortars, tanks, all of which are prohibited by the Minsk agreements, as well as small arms. The Russian weapons have killed 8 Ukrainian soldiers and left another 26 wounded,” reads the letter.

On January 30, 2017, Russian-militants’ strikes left the Ukrainian government-controlled town of Avdiivka without electricity, water and heat. In the evening of January 30, 2017, a state of emergency was declared in Avdiivka:

“More than 400,000 peaceful civilians in the region have no access to water, electricity and heat,” the document reads.

Volodymyr Yelchenko adds that Ukraine is ready to convene UN Security Council emergency meeting in the case if Russian militants continue shelling of Avdiivka, Donetsk region in the next 24 hours.

Will follow through the night, if it won’t stop, ready to convene UN Security Council emergency meeting. https://t.co/hEhxAzYZI3