Combined Russian-separatist forces attacked Ukrainian army positions in eastern Ukraine 20 times in the past 24 hours, including nine times in the Mariupol sector, eight times in the Donetsk sector and three times in the Luhansk sector, according to the press center of the Anti-Terrorist Operation headquarters (ATO HQ). 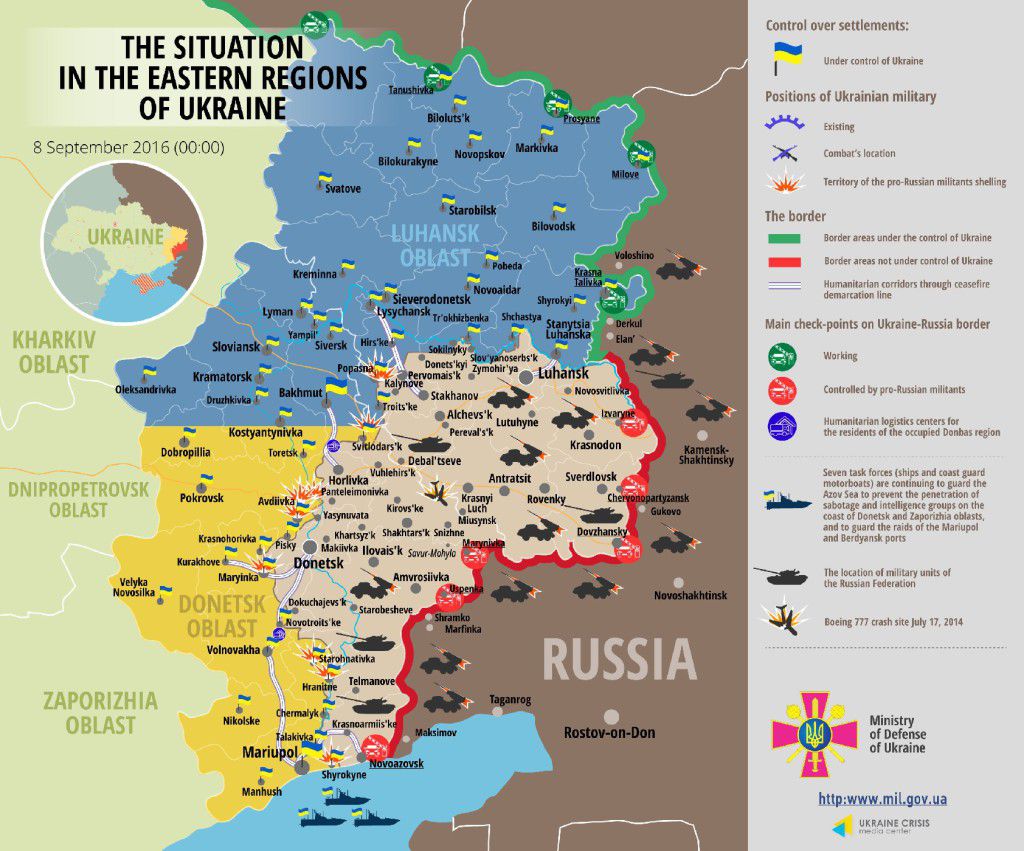 The situation in the Donbas conflict zone is controlled and is generally characterized by the observance of the ”ceasefire,” the ATO HQ wrote on Facebook at 06:00 on September 8.

In the Donetsk sector, the enemy carried out provocative attacks near the town of Avdiyivka, using 82mm mortars, grenade launchers, machine guns and small arms.

Also, militants fired machine guns and small arms on the villages of Verkhniotoretske and Luhanske, as well as rocket-propelled grenades on the village of Novoselivka Druha.

”In the Mariupol sector, the situation was tense near the village of Shyrokyne, where the occupiers used 82mm mortars, grenade launchers and machine guns,” the report says.

”The enemy also fired small arms near the town of Maryinka and the village of Starohnativka.

”Additionally, the militants fired from infantry fighting vehicles, with machine guns and small arms on the defenders of Shyrokyne,” the report adds.

In the Luhansk sector, Russia`s hybrid military force fired rocket-propelled grenades and machine guns on the village of Novo-Oleksandrivka, as well as small arms on the town of Popasna.

The Ukrainian army spotted three enemy drones in the Luhansk and Mariupol sectors.

The enemy did not use heavy weapons, the headquarters added.

The Armed Forces of Ukraine unswervingly adhere to the Minsk agreements.

”On the specially equipped training grounds in the Anti-Terrorist zone, the units of the Armed Forces of Ukraine are conducting combat co-ordination, improving vocational training and increasing the level of fire training,” the press center reported.

”The shooting is conducted according to the plan of combat training of military units and is agreed in advance with the local authorities,” it added.