Combined Russian-separatist forces attacked Ukrainian army positions in eastern Ukraine 75 times in the past 24 hours – 24 times in the Donetsk sector, 25 times in the Mariupol sector and 26 times in the Luhansk sector – according to the press center of the Anti-Terrorist Operation headquarters.

In the Donetsk sector, at the beginning of the day, the enemy fired artillery systems twice on the village of Novhorodske. 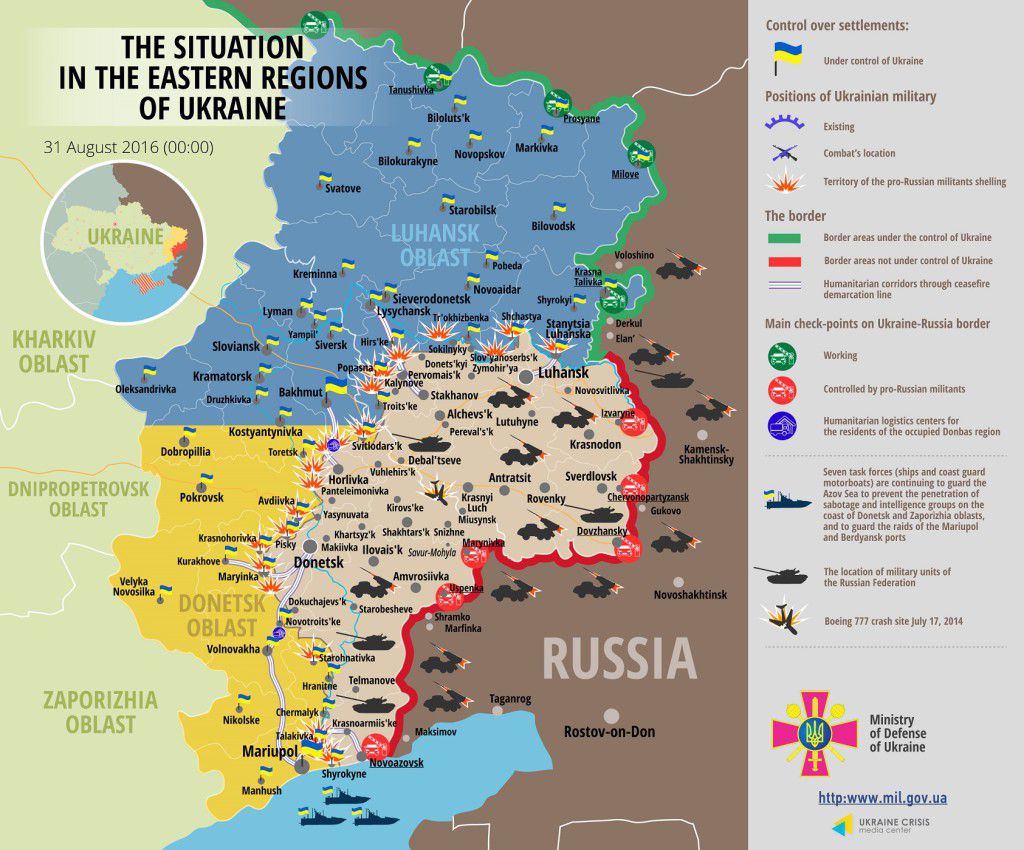 The militants fired 120mm mortars on the Ukrainian positions in the villages of Verkhniotoretske and Pisky, as well as 82mm mortars, grenade launchers and heavy machine guns on the defenders of the town of Avdiyivka, and the villages of Luhanske, Zaitseve and Pisky. In the town of Svitlodarsk, they used 82mm mortars, as well as grenade launchers and small arms in the village of Maiorsk. Additionally, the enemy fired from infantry fighting vehicles in Luhanske and Zaitseve.

”In the Mariupol sector, the occupiers also used heavy weapons. At the beginning of the day, the militants fired 122mm artillery systems and launched more than 50 shells on the Ukrainian fortified positions in the town of Krasnohorivka. In the evening, they launched 50 shells of 152mm caliber on the village of Shyrokyne. Later, they carried out about 80 shots from infantry fighting vehicles there. The villages of Vodiane, Hnutove and Lebedynske were fired from 120mm mortars. The Russian-backed mercenaries fired 82mm mortars, grenade launchers, heavy machine guns and small arms on Shyrokyne, as well as mortars in Krasnohorivka, and the villages of Talakivka and Taramchuk. In the town of Maryinka, in addition to grenade launchers, heavy machine guns and small arms, the occupiers fired from infantry fighting vehicles. A sniper was active in Maryinka and Hnutove,” the report says.

In Luhansk region, Russia`s hybrid military force fired heavy artillery systems in the villages of Novozvanivka and Novo-Oleksandrivka, having launched nearly 50 shells of 152mm caliber. More than 25 artillery shells of 122mm caliber were used on the Ukrainian fortified positions in the town of Popasna. The militants opened fire from mortars, rocket-propelled grenades and small arms in the villages of Novo-Oleksandrivka and Stanytsia Luhanska. They also fired 120mm mortars near the town of Schastia and the village of Zhovte, as well as rocket-propelled grenades and machine guns in the town of Zolote, and the villages of Novozvanivka and Krymske. Furthermore, a sniper was active in Zhovte.