Russia is massing its troops on the border with Ukraine. Russian militants continue violating the ceasefire in Donbas, opening fire in all sectors. 2 Ukrainian soldiers reported as wounded in action, according to the press service of the Anti-Terrorist Operation (ATO) Headquarters. 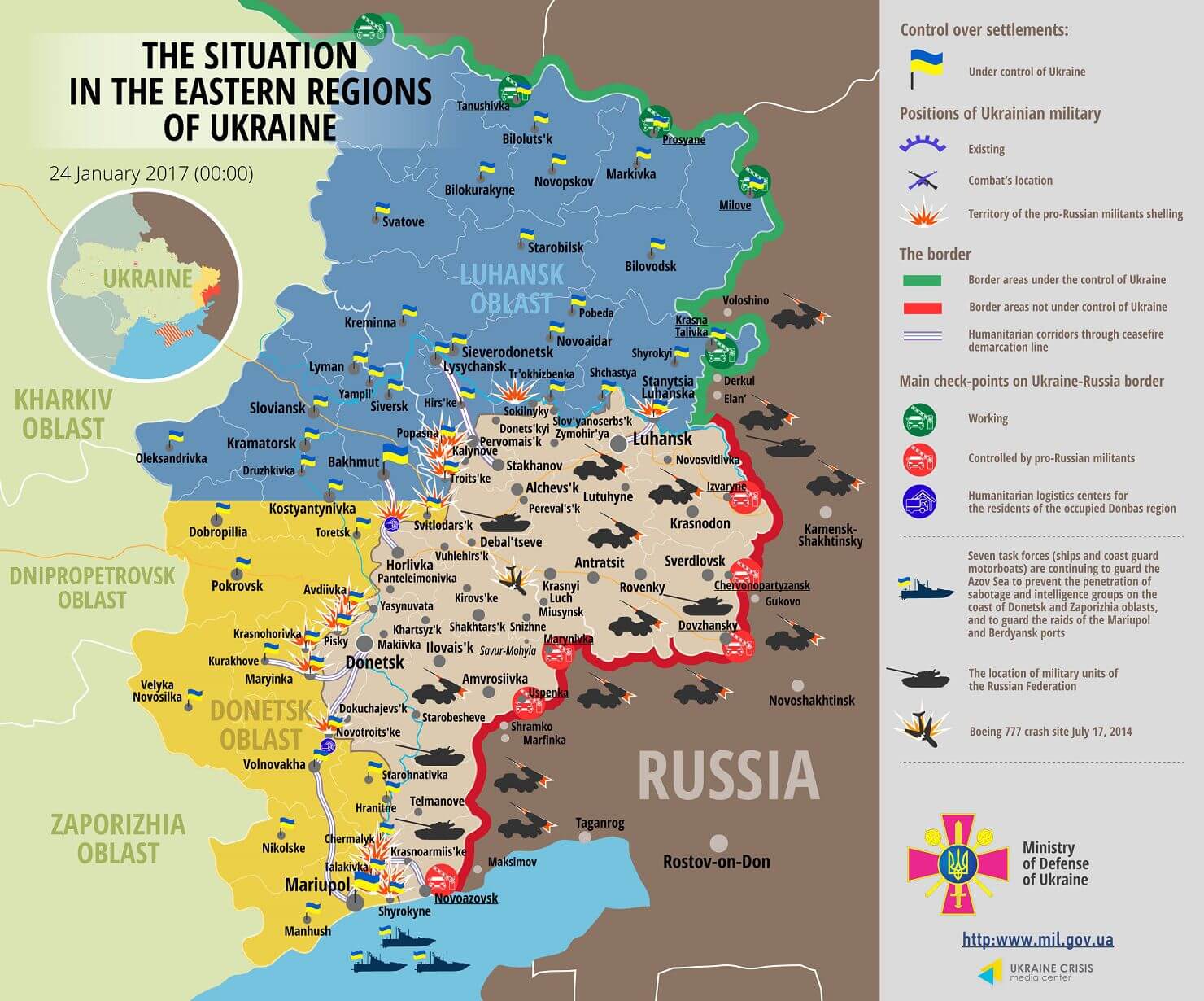 In the Luhansk sector Russian militants attacked Ukrainian positions, used banned 122mm artillery systems, and 120mm and 82mm mortars near Troitske. Russian militants conducted a number of armed provocations at daytime there. The village of Novozvanivka and the town of Popasna came under mortar fire. The militants opened fire from grenade launchers, heavy machine guns and small arms on the villages of Krymske, Troyitske, Novozvanivka, Novo-Oleksandrivka, as well as Stanytsia Luhanska, where the disengagement of forces was scheduled to take place. In total, militants conducted 19 attacks in the Luhansk sector yesterday, and 8 of them involved use of cannons and mortars.

In the Donetsk sector Russian militants started actively shelling Ukrainian positions at the Avdiivka Zaitseve and Opytne with while rocket-propelled grenades and small arms. Russian militants used banned 120mm mortars to attack the village of Luhanske. A sniper was active in the village of Pisky. Furthermore, Luhanske was attacked by infantry fighting vehicles. The enemy used mortar launchers together with light weapons. Attacks stopped after 5 hours of firefights. Moreover, the situation was restless at the Svitlodarsk bulge where militants were shooting at Ukrainian positions for three hours. Russian militants violated the armistice once on the north outskirts of Horlivka. In total, 6 hostile attacks took place in the Donetsk sector yesterday, and 2 of them involved use of mortar launchers.

In the Mariupol sector Russian militants repeatedly used 120mm and 82mm mortars to shell the towns of Krasnohorivka and Maryinka, and the village of Shyrokyne. Russian militants fired rocket-propelled grenades and small arms on the villages of Pavlopil, Hnutove, Talakivka, Novotroyitske, Shyrokyne, Vodiane, and Lebedynske. Snipers were active in Novotroyitske. Strongholds near Krasnohorivka and east approached to Mariupol became the area of main hostilities. Russian militants were extremely aggressive in Krasnohorivka, conducting one of the largest mortar attacks in the recent months in this frontline area. Russian militants launched over 80 mortar shells of various caliber from the direction of Staromykhailivka at Ukrainian positions within less than 3 hours. Firefights continued all day long in the frontline from Pavlopil to Shyrokyne. Russian militants’ sniper was active in Novotroitske two days. Militants conducted 26 attacks in the Mariupol sector yesterday.

See also: The President of PACE calls for the lifting sanctions against Russia