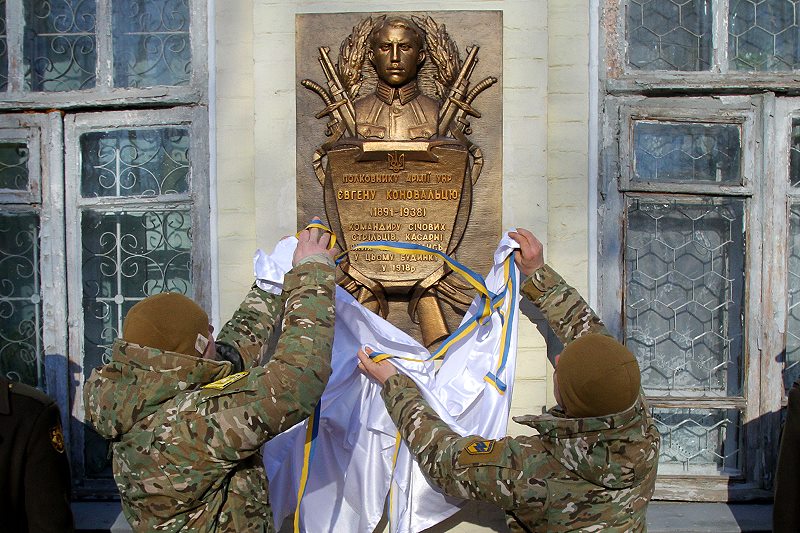 A commemorative plaque to Yevhen Konovalets was installed at the house №24 along the street Sich Riflemen in Kyiv that the Sich riflemen used as barracks in 1918.

See also: Ukraine has celebrated the Day of Unity and 98th anniversary of signing Unification Act

The historian underlined that Yevhen Konovalets, a military commander of the UNR army, was one of the symbols of the struggle for Ukrainian independence:

“Yevhen Konovalets was one of the key players in Ukrainian history of the 20th century. No wonder that he was one of the symbols of the struggle for independence. He realized the need to create the Armed Forces when high-ranking politicians were only discussing this issue. He was among those who conducted efficient anti-terrorist operation in Kyiv to prevent Bolshevik coup in the city in January 1918. He had significant impact on the future generation of freedom fighters of the 1940s and 1950s,” said Volodymyr Viatrovych.

Director of Ukrainian Institute of National Memory stated it was no surprise that the truth about Konovalets was suppressed or distorted in Soviet times.

“He was made an utter anti-hero by the Soviet and modern Russian historiography and propaganda. But we see that this propaganda is also making anti-heroes of our contemporaries. I think that this should instead challenge minds of those who are still afraid of Konovalets under the influence of the Soviet and Russian myths and make them read some facts about him. All the more, there is plenty of relevant information,” he added.