“Investigation Department of the Interior Ministry initiated criminal proceedings against actor Mikhail Porechenkov under Art. 260, Part 4 of the Criminal Code of Ukraine.” – says the Minister of Interior Affairs Arsen Avakov

Mikhail Porechenkov arrived to Donetsk as part of the armed gang, personally took part in the shooting at the units of the Ukrainian armed forces with automatic weapons. The video was shown on all TV channels, demonstrating this Russian citizen committing a crime in the territory of Ukraine. According to the Criminal Code of Ukraine, the offense is punishable by imprisonment for a term of 7 to 12 years.
In addition Porechenkov used marking signs “Press” on his clothing that may subsequently lead to incidents with real journalists. 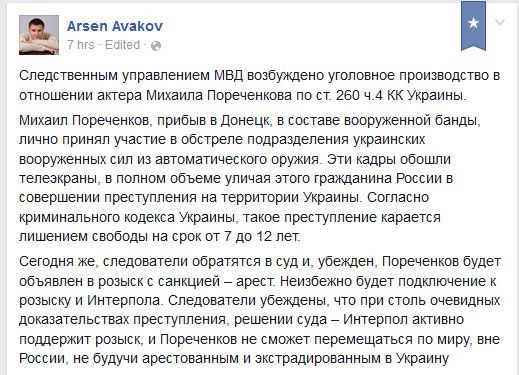 “Today, however, the investigators apply to the court, and I’m convinced that Porechenkov will be declared wanted to sanction – the arrest. The involvement of the Interpol is inevitable. The investigators believe that with such obvious evidence of a crime and the court’s decision, the Interpol will actively support the search, and Porechenkov will not be able to travel outside Russia without being arrested and extradited to Ukraine,” Avakov wrote on his facebook page.

Today Porechenkov has said that he fired just with blank bullets.