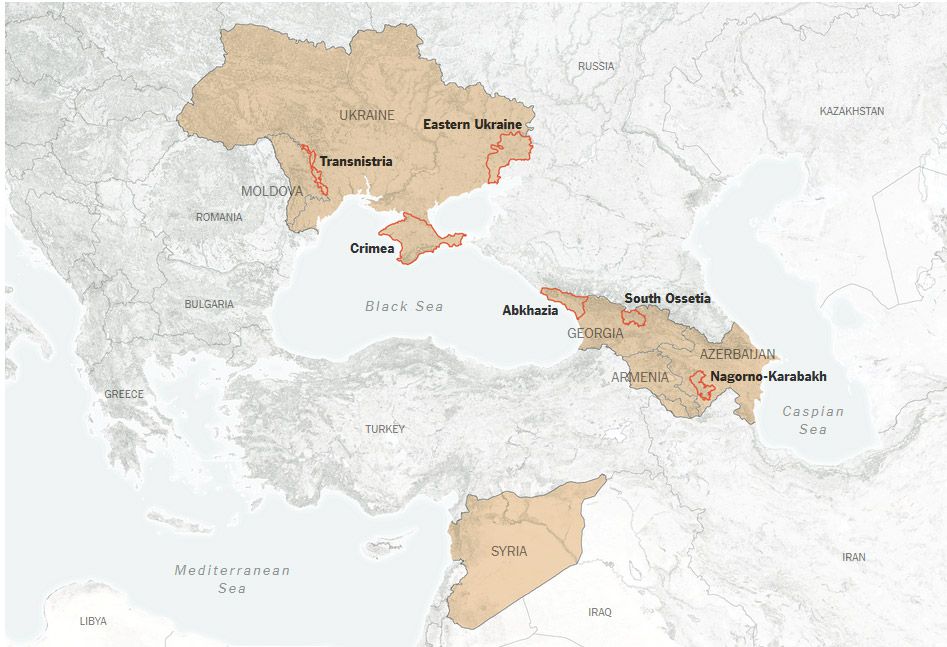 Where Russia has intervened in former Soviet republics. By The New York Times

Since the fall of the Soviet Union, Russia’s international military operations have focused almost exclusively on its neighbors, former Soviet republics.

“One pattern is clear: interventions that inflame conflict and create permanently tense and unstable “frozen zones,” allowing Russia to exert influence and confound its opponents and, often, its rivals in the West. The Kremlin has said that it is protecting its own interests and those of ethnic Russians in those areas.”

In Ukraine nearly 8,000 people have died since Russian-backed separatists began fighting Ukrainian government forces in April 2014. The United States and the European Union have imposed heavy sanctions on Russia for its actions there.

The Ukrainian government says the Kremlin has sent thousands of troops and advanced weapons across the border into Ukraine.

“Russia denies that it has any active-duty forces on the ground. However, it has criticized the current Ukrainian government, saying it is the result of a coup, and expressed alarm over attacks on ethnic Russians there that the United Nations has called exaggerated.”

This month, Russia, Germany Ukraine and France held talks aimed at strengthening the Minsk accord, a peace agreement hammered out in Belarus in February. The deal is supposed to be put into full effect by the end of the year.

In sharp contrast to its strategy in “frozen zones,” Russia annexed Crimea last year and has pledged to send billions of dollars in aid. The largely bloodless takeover came after a referendum in which an overwhelming majority of residents chose to come under Moscow’s control. It was Russia’s deepest confrontation with the West since the Cold War, and prompted Western sanctions.

“But life remains in disarray on the Black Sea peninsula. Residents say freedom of speech and assembly have largely evaporated, while government corruption and incompetence have remained constant. Sanctions have damaged the economy and isolated Crimea from the outside world.”