Ukrainian society is shocked because of the appointment of 24 year old Anastasia Deeva as Deputy Minister on European integration of Internal Affairs of Ukraine (Ukrainian Police). Deeva “became famous” in social networks with her nude photo.

In 2013-2014 Anastasia Deeva worked as the assistant to Leonid Kozhara, Advisor to Victor Yanukovych on international issues, the people’s Deputy of three convocations from the “Party of regions”, Minister of foreign Affairs of the government of Azarov. Of course, Deeva worked as a helper in the time of Yanukovych. 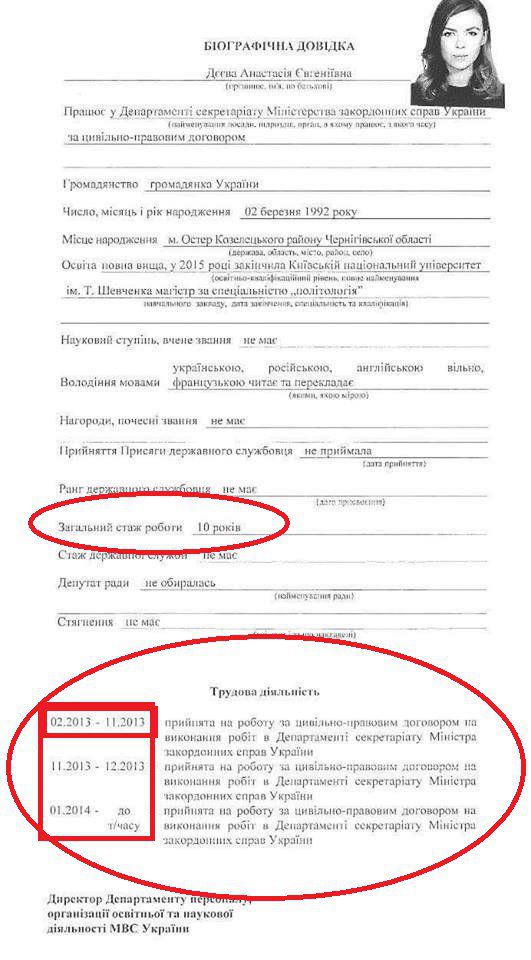 About violations in the process of the appointment on the post said Iryna Gerashchenko. She says, Deeva wasn’t agreed with the Vice Prime Minister on Eurointegration of Ukraine so were ignored the legal procedure.

But the Head of the Police Avakov defended his protégé, writing in Facebook that Deeva had passed all special checks.

“Those who say about violations in the process of the appointment on the post – don’t know what’s what.”

About this on air of one of Ukrainian television said the adviser Avakov, people’s Deputy Anton Gerashchenko.

“I personally know Anastasia Deyev. Her task is to help the Minister of the interior, to do everything possible to support America, Japan and other countries, which help us in carrying out reforms, not reduced, but increased, their knowledge, experience, charisma,” said Gerashchenko.